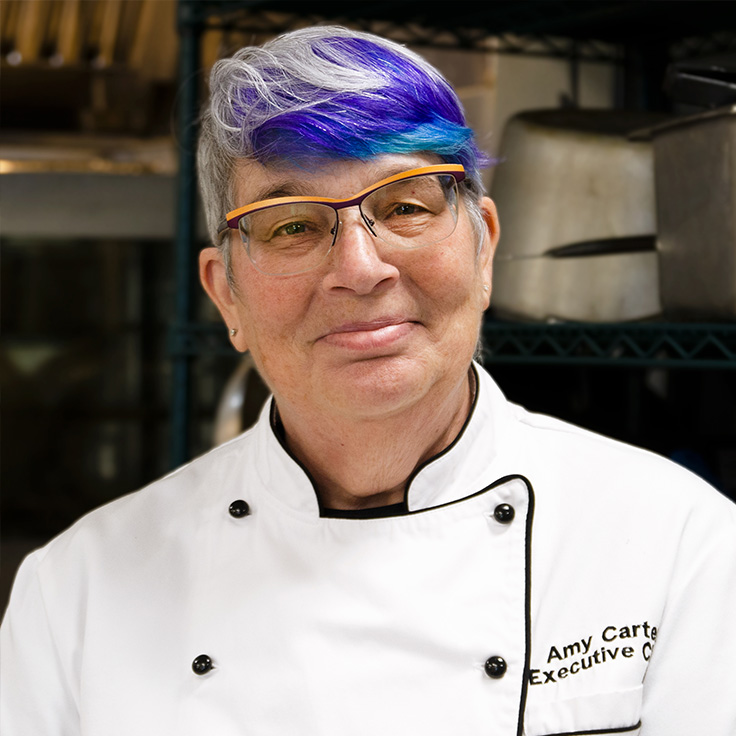 Don’t ask Amy Carter, our executive chef for product development, for an all-time favorite food: She’ll pretty much refuse to answer — for all the best reasons. “I don’t think I could ever pick just one,” she told us, laughing. “I believe food supplies the soul, so sometimes you need one thing and sometimes another. Also there are very few foods that I don’t love, which is why I go to the gym everyday.”

That deep and abiding love of food is also one of the reasons why she’s the chef of all trades on our product development team, creating new recipes and products for our seafood, deli and bakery departments. The other reasons include curiosity, a collaborative nature and a comprehensive (and very interesting) culinary background.

A teacher and a dedicated lifetime learner
Listening to Amy talk about her career, it’s clear that for her education — learning and teaching — is an integral part of work. She comes by that bent honestly: both of her parents were professors at Penn State University. Still she didn’t set out to be a teacher. “I didn’t see it coming,” she said, “and I don’t think my parents did either.”

As a young chef, Amy apprenticed with a French pastry chef at a restaurant in Pennsylvania with a busy, well-known bakery attached to it. “We had three full-time pastry chefs, and we were all in constant motion,” she says. “We made everything from traditional French pastries to bread, American pastry and cakes — and we were famous for our caramel rolls.”

Amy came to Minnesota in the mid-1990s. She landed at the Woman’s Club of Minneapolis, where she made pastries, breads and desserts for special events, like weddings and fundraising galas. “The Woman’s Club was a wonderful experience,” she says. “Working there upped my baking skills because we were making beautiful, high-end pastries and desserts.”

She left there to take a dream job at the Art Institutes International Minnesota culinary school, where she not only taught pastry courses and lectured, but also expanded the school’s culinary focus to include a baking program. “That was a wonderful time,” Amy says. “It was just so gratifying to see my students succeed. They’re now outstanding pastry chefs, restaurant owners and food stylists. They’re working all over the world.”

She taught at the school for 19 years, and she says it was also an incredible learning experience. “A lot of very good people taught at the school,” she says. “Over the years, I gained more food science from teaching and from my fellow teachers than I ever learned in a kitchen. It expanded my range as a chef hugely.”

Food science in action: developing the boosted donut
If you read our recent profile of Product Development Manager Michael Selby, you know that the role of the Lunds & Byerlys research and development team is to create new products that make our customers’ lives easier, save them money and time — and, along the way, introduce them to new and interesting foods.

Amy recently worked on a project that ticked all those boxes: The L&B Boosted Donut. This very scrumptious project began, as many do, with a question. Our CEO, Tres Lund, wondered if it would be possible to make a fried donut that someone could feel good about eating and giving to their children. “He wanted a fried donut with a little something extra to it,” Amy explains, “something to make all those calories worthwhile.”

In other words, a fried donut boosted with protein and other worthy nutrients. Surprisingly, considering the idea’s merit, no such donuts existed: “There were high-protein freezer donuts and baked donuts, but they were more like muffins in a donut shape,” she says. “None of them were fried, which makes sense. Frying changes the nature of protein completely — so that was the big mountain to climb.”

Early experiments with adding proteins — whey, plant-based proteins, collagen — all yielded donuts that bounced around in the oil and stuck to each other, forming great big donut globs. “They were like rubber balls,” Amy laughs. “They tasted like donuts, but they sure didn’t look like donuts.”

Not to be defeated, Amy says she doubled down on the research. She talked to all our bakery suppliers. She went to the Research Chefs Association conference and asked everyone she met for advice. “I said, ‘Hey, this is what I’m doing,’ and they looked at me like I was crazy. No one had any ideas to help, no magical product, all I could do was keep experimenting with proteins.”

An added challenge was the fact that, at Lunds & Byerlys, we produce hundreds of donuts a day: Our fryer runs from 11 o’clock at night to 1 o’clock the next afternoon. At that rate of production, our bakers need a straightforward recipe — they don’t have time to fuss with a complex formula. Amy needed a simple solution.

Success: it tastes just like a real donut should
In the end, it took nine months, but she found one. The fact that she could work on the recipe for that long, she says, is evidence of Lunds & Byerlys extraordinary commitment to product development. “It makes it possible for innovation to happen,” she explains. “In this case, it allowed me to play with the kernel of an idea, work through a huge learning curve and create a donut boosted with plant protein — something people are really interested in right now. It’s wonderful to have that backing.”

The recipe for L&B Boosted Donuts includes a booster that’s high in plant-based protein, fiber and iron. It’s even got some chia seed in it. Amy also added low-fat, high-protein yogurt to the donuts — for extra oomph and a nice, tangy flavor. And, of course, the donuts are drizzled in white icing.

She knew she’d nailed it when she tested a couple L&B Boosted Donuts on her grandsons, ages 5 and 8. “They loved it,” she says. “They knew it was a boosted donut, but they couldn’t taste the difference. They don’t get to eat a lot of sweets, so it was just a big treat.”

“The donuts have a little more body to them because of the added protein and fiber,” she adds, “but otherwise, they just taste like a slightly spicy donut. That’s what we were going for — after all, donuts are great because they are a little bit sweet and a little bit fried.”

Revisiting the idea of favorites …
What’s next for Amy? She’ll be expanding our steamers, a line of fresh meat and seafood that’s paired with a starch and veggies in a microwaveable container. “Steamers are great because they’re fresh but still microwaveable, and steaming makes them so healthy. Also, I just love eating fish, and we have such high-quality fish, it’s a fun project for me.”

Aha, a favorite! She also admits to loving to bake and eat cookies. In fact, every year she volunteers to bake off all the cookies for the Star Tribune’s Best Holiday Cookies contest so the judges can taste them. “Cookies have owned my heart since I was a little kid,” she says. “Now I think it’s because everyone loves a cookie — there are very few people who won’t eat a cookie. So it’s my goal to make a boosted cookie next.”