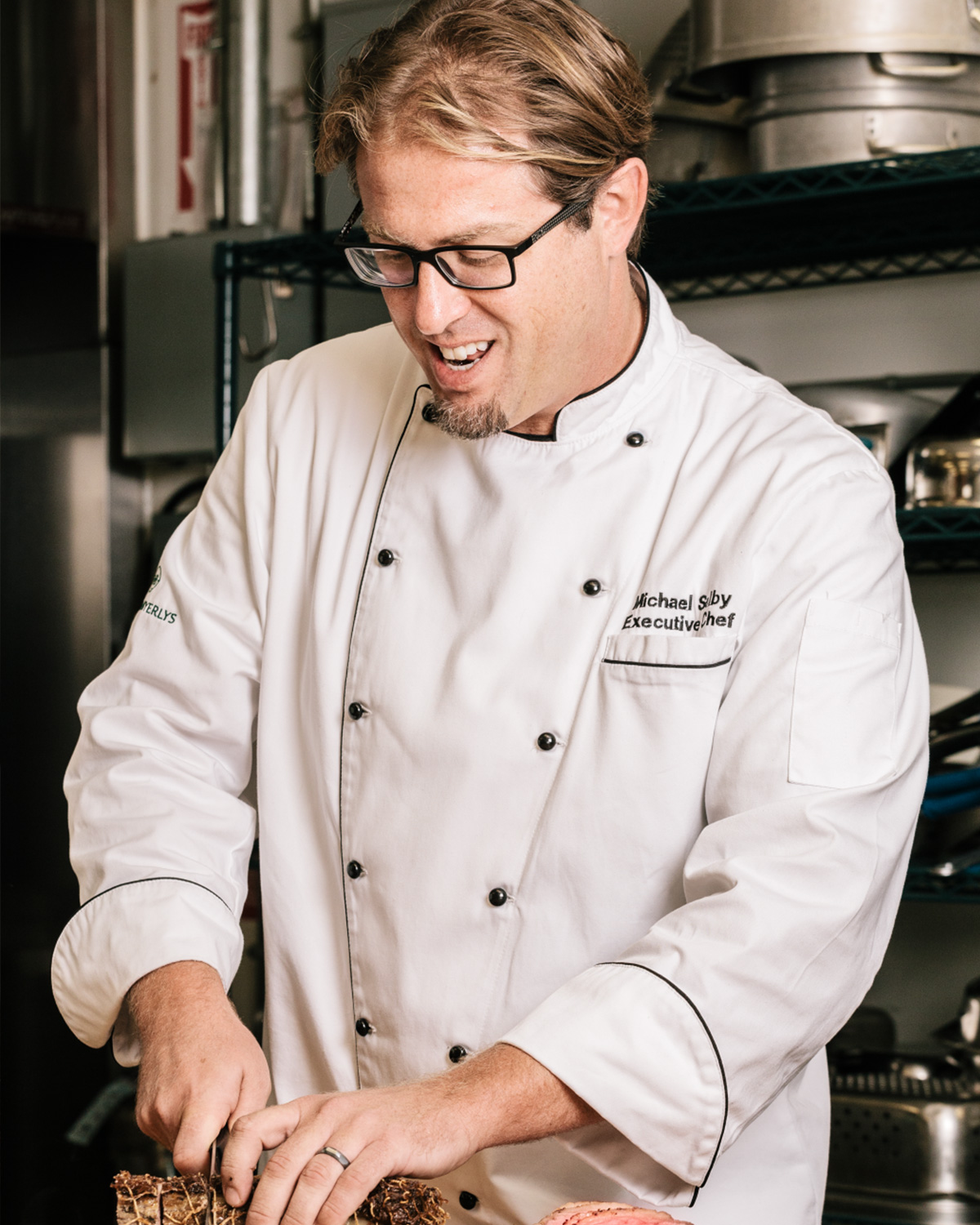 We all love what we do, but Michael Selby might have the coolest job at Lunds & Byerlys. As our executive chef, he develops new meat and seafood recipes — and as our head inventor he runs our product development department, which creates new products not only for meat and seafood, but also for the deli and bakery.

If you’re wondering what sort of products a supermarket develops, we get it. Aren’t recipe and product development kinda the same thing? Yes and no: Some of our products are recipes, of course. But in the world of food, Michael says, creating a product that tastes really good is a given, the price of entry if you will. The goal is to create products that also make our customers lives easier, save them money, help them get dinner on the table faster — and bring them new and interesting foods. “It’s about the whole customer experience more than the flavors,” he explains, “though that’s always our favorite part. Well, that and creating something that doesn’t exist anywhere else in the world.”

Of course, product development demands an inventor’s imagination and a scientist’s approach to food — in addition to being an experienced and knowledgeable chef. Michael’s unique culinary background set him up for the job perfectly.

The international chef — opening restaurants in Italy, Spain and Monaco
A couple decades ago, Michael left his job at the St. Paul Hotel for an opportunity with an international Italian restaurant group. As the group’s Sous-Chef de Cuisine (that’s restaurant speak for second-in-command), he spent his winters cooking up beautiful Italian food in Florida — and his summers opening new restaurants in Italy, Spain and Monaco. “These were upscale restaurants, everything was fresh and we started over from scratch every day,” he said. “On the French Riviera, we had to get up very early in the morning to go up to the top of the mountain and get our vegetables, and then bring them back down to our kitchen on the beach. These were long days of working crazy hours.”

Still, Michael describes that experience as both “a 5-year high” and formative. “Basically, I was on the road for many years,” he says. “Seeing that kind of start to finish with the dishes and being exposed to so many techniques and cultures, was such an education. I learned a lot about ingredients, how they work together and what happens if they don’t.”

In 2004, Michael brought all of that experience to Lunds & Byerlys, where he says there is no such thing as a typical day. There are always several projects in the hopper. On any given day he might be at his bench in the kitchen playing with flavors, testing a recipe that’s a little further along, or leading ideation for one we haven’t even thought of yet. He could also be out on the floor demonstrating a new product for the team — or at his computer working through the nitty-gritty details, like nutritional data and regulatory requirements.

Our approach to development is high risk — and high-reward
Developing new recipes and products is a creative process, Michael says, and everyone approaches it differently. Some people like to start with an existing recipe or product, and then take it apart or build on it. “For me, development is much more like creating a piece of music,” he says. “I like to start with a melody — a single flavor or attribute — and then add the other ingredients, or instruments, to it. That can be a high-risk approach, but when it works there’s a high reward because we get a truly unique recipe or product that’s exclusive to us.”

At Lunds & Byerlys, recipes and products often begin with a general idea. It could be as simple as creating a unique recipe for a turkey breast, or as complex as developing new packaging technology for L&B Seafood Steamers. “Each department is a little different,” Michael says, “but it always starts with an unmet need. We don’t do a lot of fast-following of competitors. We start with what isn’t out there already. We call it white space development.”

For example, not long ago, the product development team set out to develop a new aging process for beef that combines the best of dry and wet aging. Dry aged beef hangs in a cool, clean environment for up to two months. “It’s great because it has this nutty, buttery flavor and a tender texture,” Michael says, “but it’s hard to create a consistent product in large amounts, and it loses about 20% of its weight — so it costs more.” Conversely, wet aged beef is packaged and aged in refrigeration. It’s more consistent, there’s no fluid loss, but you don’t get the rich flavor of dry aging.

The team’s goal was to create an aging process that would yield consistently flavorful beef — at close to its starting weight, so they could charge a consumer-friendly price for it. Michael says the team’s experiments can range from “mild to wild,” and this one was at the far edge of the spectrum, including retrofitting a bakery case with a lining of pink Himalayan salt and a fan to create a tiny beef-aging cave and wrapping the beef in cedar paper to mimic historic French lamb-aging methods.

In the end, the solution they came up with might sound even wilder: They rub activated charcoal and a proprietary sea salt blend into the beef fat, wrap the meat in the aforementioned cedar paper and age it. “When we trim the fat, the beef tastes amazing,” Michael says. “ And you can only get it here because it’s patented, and we’re the only ones with FDA approval to make it.”

The best part is working collaboratively with the L&B team
For Michael, this kind of invention is the best part of his day. “It’s getting to work with great people, from all kinds of different food backgrounds, who love food as I do,” he says. “It’s the collaboration, the creation and the lofty goals. We have the capability to be the best in the world at something and we’re developing things the world doesn’t have today.”

“We change lives through food all the time,” he adds. “Sometimes, I’m in the test kitchen, making a little 6-pound batch of something, and I think someday, we’ll be making thousands of pounds of this, and it’ll be a part of people’s proposal dinners, celebration-of-life parties and birthdays. You know, all the experiences that people have. That’s pretty cool.”