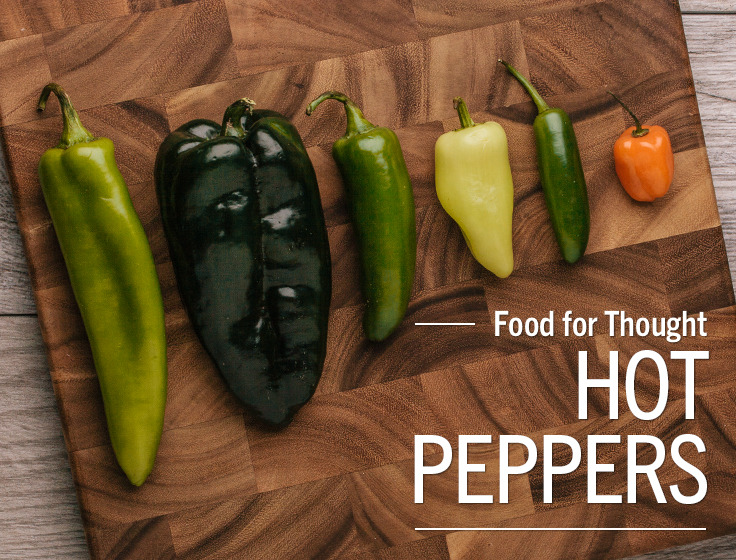 Know your peppers: The spicy facts about six popular chiles

Before you choose a chile pepper,
make sure to get the facts on exactly how spicy it is! Pepper pungency is
measured by the Scoville Heat Scale,
which indicates the amount of capsaicin (a spicy chemical compound) in each
pepper. The higher the rating, the hotter the pepper.

Here’s the rundown on some of the
most popular peppers:

Poblano (1,000–2,000 SHU): These
mild peppers are dark, purplish green when immature and eventually turn a very
dark, almost brownish red. They’re usually 3-6 inches long and 2-3 inches wide.
Typically, poblanos are roasted, peeled and used in salsas, sauces, or stuffed and eaten
whole. When dried, the poblano becomes a broad, flat, heart-shaped
pod called an Ancho chile which is often ground into a powder and used for
flavoring recipes.

Jalapeño (3,500–8,000 SHU):
Perhaps one of the most famous chile peppers, this medium to large size chile
is prized for its warm, burning sensation when eaten. Jalapeños are used in a
wide variety of Mexican recipes.

Yellow Hot (5,000–8,000 SHU): Often
mistaken for the less spicy banana chile, this variety is usually about four to
six inches long. It has a medium to hot flavor and is often served fresh in
salads, salsas or appetizers.

Serrano (8,000–23,000 SHU): Up to
five times hotter than the jalapeño pepper, the serrano
is one of the easiest peppers to use for salsas, because it doesn’t need
to be steamed or peeled before using.

Habanero (200,000–350,000 SHU): Known
for its intense spiciness, the habanero chile pepper is typically bright
reddish-orange and 1 to 2-½ inches in length. Habaneros can be used to spice
up your favorite salsa recipe…if you can take the heat!

In comparison, the hottest pepper
in the world is called the Carolina Reaper,
which checks in at a blazing 1,500,000–2,200,000 SHU. It’s a hybrid between the former
hottest pepper world record holder and a red habanero pepper.