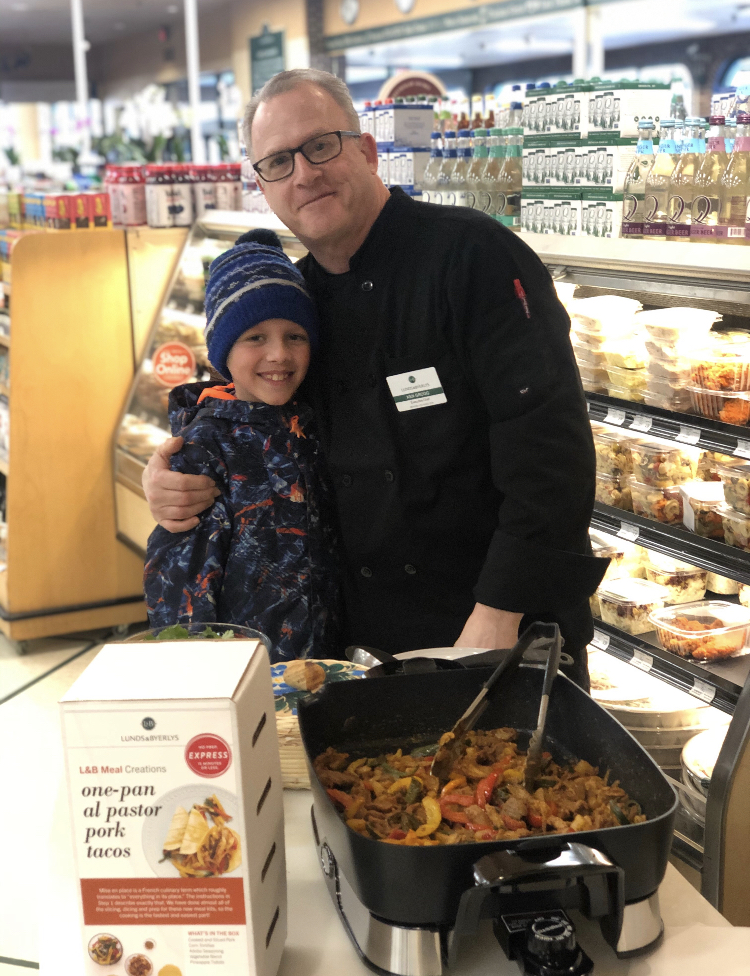 If something was a big deal in the Minnesota food scene in the past few decades, there’s a good chance Ken Grogg played a role in it.

Studying at the L’Hotel Sofitel School of French Culinary Skills, the celebrated Bloomington-based landmark that trained some of the region’s best chefs? That’s how Grogg got his start cooking in Minnesota.

Creating all the stocks and sauces for Café Royale, part of the Sofitel’s vaunted restaurant empire? Grogg did that, too.

Planning and preparing a Minnesota-centric meal for Governor Rudy Perpich’s state dinner with Mikhail Gorbachev? That was Grogg.

Developing the American Regional Cuisine curriculum for the Arts Institutes International Minnesota? Once again, Grogg was at the helm.

As you may have guessed, Grogg loves Minnesota food — and he’s exceptional at making it. So it’s fitting that Grogg finds himself at Lunds & Byerlys, a family-owned Minnesota company where he’s the executive chef in charge of L&B Meal Creations, the meal-kit program that makes at-home cooking faster and more enjoyable, and makes meals more memorable.

“It’s a funny thing,” says Grogg, who moved to Minnesota from Illinois in the late 80s and never looked back. “The meal kits represent how my career started. The first few L&B Meal Creations had a fairly heavy French influence, and then we rolled right into some Minnesota-themed meals. One of the first meal kits we did was pan-seared pork loin with apple salsa and potatoes, Brussels sprouts and apple cider vinegar. It was a great fall dinner for two.”

Grogg has made seasonality and attention to regional flavors key parts of L&B Meal Creations, so not only do the meal kits make home cooking easier by providing high-quality ingredients and step-by-step instructions, they connect eaters to the tastes and rhythms of the upper Midwest.

Cooking for Minnesota’s First Families (and Some Well-Known World Leaders)
Grogg discovered two things when he first moved to Minnesota: he loved learning about food and he loved Minnesota foods and food traditions. That’s one of the reasons he jumped at the chance to be the executive chef at the Minnesota Governor’s Residence.

“I got a call that I wasn’t expecting,” says Grogg, who was working at Café Royale at the time. A fellow chef knew about his educational background and knowledge of French pastry and told him that the woman who took care of meals and state dinners for Minnesota’s first families was retiring. “He asked me to interview with the Perpiches and I got the job,” says Grogg.

Within months of landing the job, he learned he’d be part of the team planning and preparing a Minnesota-centric state lunch for Mikhail and Raisa Gorbachev.

“We had a whole team pulled together to create this menu,” says Grogg. “We wanted the meal to represent the state of Minnesota and the indigenous food traditions we have here. The first course was pecan-breaded walleye. The main meal was veal with morel mushrooms, an essential Minnesota food. We had wild rice, of course, and we did a spring mix with polenta and a minted sweet biscuit for dessert.”

The pecan-breaded walleye made an indelible mark at the mansion. “It became one of the hallmarks of the Governor’s residence, even after Governor Perpich left,” says Grogg. “It showcased what we have to serve here in the upper Midwest. This was a real moment of clarity in my career.”

When Grogg left the Governor’s residence at the end of Governor Ventura’s term in 2002, he had the chance to combine his love of learning and his love of Midwestern cuisine by developing the curriculum for American Regional Cuisine at The Arts Institutes International Minnesota. “Once again I was able to showcase the wonderful ingredients found here in Minnesota,” says Grogg. “That was great.”

Designing L&B Meal Creations
So when Grogg joined Lunds & Byerlys five years ago, it was a full-circle moment. He began his tenure as one of our FoodE Experts — key team members who help customers navigate stores, find new ingredients and solve kitchen conundrums. The position combined his love of learning and teaching culinary arts with his love of Minnesota food.

“The FoodE Expert is such a great position for Lunds & Byerlys to have, especially right now,” says Grogg. “In these uncertain times, so many people come in and are afraid. Having a calm voice in the store to help guide them is reassuring.”

After all, he continues, everyone still has to eat “and helping them fulfill that basic human need — helping them do it in the most enjoyable way possible — that is an important role, I think.”

About a year into his tenure as a FoodE Expert at the Eden Prairie store, Grogg was approached about the meal kit program. Was he interested in helping Lunds & Byerlys establish their own in-house meal kit program?

Grogg was integral in every stage of the development process, from designing the L&B Meal Creations minimal, environmentally-friendly packaging to selecting the flavorful, high-quality ingredients that go into each box. “One of the most challenging and most fun jobs I had [in the development process] was working to get the most flavor out of the fewest ingredients that would fit in the box,” he says.

The meal kit program launched out of the Eden Prairie store in 2017. Grogg has worked since its inception to make sure each kit meets customers’ needs. To date, the team has introduced roughly 90 different custom meal kits.

“We got a lot of feedback early on,” says Grogg. “And when we listened to the customers’ voices, I was able to build the program to their specifications. I built the flavor profiles they were looking for, the ingredients they wanted, and even the best way to describe the cooking process for them.”

All the meal kits are prepared at the Eden Prairie store “so people can count on the same quality of produce and protein” they expect when shopping at Lunds & Byerlys, says Grogg. Six different meal kits are always available, with three new kits rotating onto shelves each week. This summer, a number of the meal kits are designed to be thrown on the grill as easily as they can be tossed in the oven. Each meal kit takes 40 minutes or less to prepare and serves two people.

“It is a real convenience for people to pick up a box and know that everything they need is in it without much waste,” says Grogg. “It helps people get out of food ruts. It keeps them from eating something they are already eating once a week.”

More than anything, says Grogg, it is Lunds & Byerlys’ commitment to quality and customer service that makes him so proud to be part of the team — especially right now. “As a family-owned Minnesota business, Lunds & Byerlys has never stopped trying to be your local family grocery store, and that is so utterly important during these challenging times,” he says. “From the very early days of the pandemic, our people have been going into the stores and keeping the shelves as stocked as possible. They were tireless. They just kept going. I’ve never seen that type of selfless dedication before in a company I’ve worked for.”