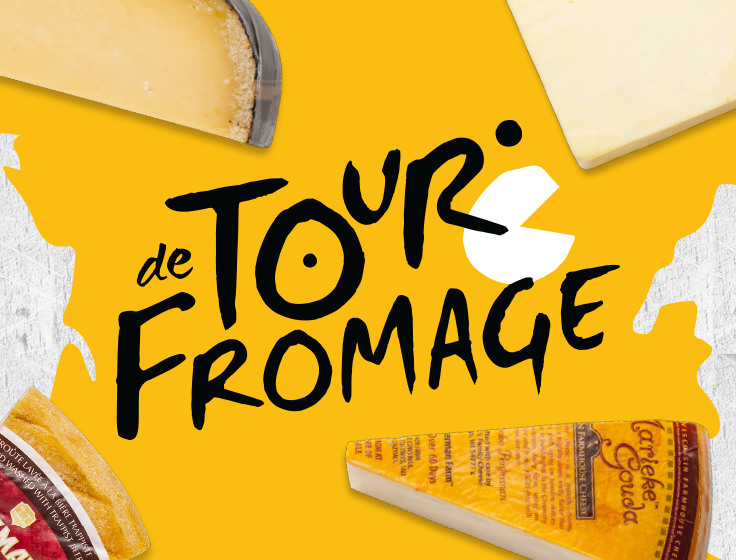 Tour de Fromage: The race is on!

Nine cheeses will face off … but there can only be one winner! Follow the race and help us choose the champion: Stop by our deli between July 7 – July 31, sample the cheeses and text BIKE to 55955* to vote for your favorite. When you cast your vote you’ll receive a $5-off coupon for cheese and be entered for a chance to win a new bike!

Stage 1: (July 7-13)
Lagrein
• A tomme-style cheese from the northern Alto-Adige region of Italy.
• Made with pasteurized cow’s milk, aged for six weeks.
• Local Lagrein wine with added herbs, garlic, and pepper is used to soak the cheese for five days.
• The name Lagrein comes from the German term “wine cheese.”
• Pairs well with a Lagrein wine, from the same region.

Gruyère
• A classic Swiss style with a rich, tangy, nutty flavor.
• Made by Emmi, the largest importer of the finest specialty cheeses from Switzerland.
• Made with pure, farm-fresh, part-skim cow’s milk that is delivered twice a day.
• Aged a minimum of 12 months.
• Swiss cheeses can date back 800 years and many traditions are kept untouched.
• Crystals appear throughout the cheese, caused by aging. These are a sign of high quality cheese and are very desirable.
• Gruyère is a key ingredient for fondues, cheesy potatoes etc.

Manchego Young
• A raw, pasteurized, cheese from the region of La Mancha, Spain.
• Made from 100% sheep’s milk: A thick, aromatic milk from sheep grazing on shrubs and grasses of the Dehesa, a tree-studded meadow in Spain.
• Features a green, gray, or black cross hatch pattern on a natural, inedible rind.
• This is the most popular cheese in Spain and their #1 exported cheese.
• Firm and dry, yet rich and creamy.
• The flavor of the cheese is full but mild, with a nutty, tangy, sweet and slightly salty finish.
• It is usually aged 3 to 14 months.

Stage 2 (July 14-20)
Grafton 2 year
• A raw cow’s milk cheddar made by Grafton Village Cheese Co.
• Their cattle graze the Green Mountain State of Vermont.
• Their cheesemaking traditions date back from the nineteenth century, when dairy farmers gathered together in a cooperative to make their surplus milk into cheese.
• Tyrosine crystals reflect the 2-year aging process in this classic mature cheddar.
• Selected for its pronounced raw milk flavor and smooth finish.

Marieke Plain Gouda
• A pasteurized cow’s milk farmstead cheese.
• Gouda style: smooth, nutty and slightly sweet.
• Aged on traditional Dutch pine planks.
• Uses the best quality of milk, piped fresh into the vats from the first milking.
• Milk becomes cheese within 5 hours of milking.
• Results in extra creamy milk that is velvety smooth, giving a melt-in-your-mouth texture and flavor.
• Marieke and Rolf Penterman immigrated to Thorp, Wisconsin, from the Netherlands in 2002 and bought a dairy farm. After obtaining a cheesemaking license, Marieke returned to Holland to learn in a traditional boerenkaas (Farmhouse Cheese Plant).
• In 2006, she made her first batch of Gouda and has been winning awards ever since!

Stage 3 (July 21-27)
Rembrandt
• 100% pasteurized cow’s milk cheese.
• Gouda-style cheese, made in Holland.
• Matured for 12 months minimum.
• Full-bodied, with a deep flavor reminiscent of butterscotch, nuts and caramel.
• The cheese is considered a “masterpiece” and named after the Netherland’s painter Rembrandt van Rijn.
• A perfect accompaniment to medium and full-bodied red wines.
• Bronze winner at the 2009 World Cheese Awards.

Chimay Bier
• A semi-soft cheese made from scalded cow’s milk.
• The rind is washed with the brewery’s famous Chimay beer .
• Features a nutty, well-finished flavor with just a hint of hops and malt.
• Just north of the French border lies Chimay, a town in the Belgian forest of Mont du Secours. In 1850, Trappist monks built a Cistercian Abbey there as a place to study, pray and work. In 1862, the monks added a dairy and a brewery to the Abbey to help generate funds for their livelihood, and started making cheese from the milk produced at the dairy.
• Today’s Chimay Bier is a variation of this original recipe.

Ermitage Brie
• Soft ripened cheese made from nutrient-rich cow’s milk.
• Made with pasteurized milk, without animal rennet – ideal for vegetarians.
• A double-crème Brie, widely recognized and revered for its creamy texture and subtly complex flavor.
• Milk makes the difference! The famous Vosges milk is processed into cheese according to traditional recipes and brings a distinctive flavor to this cheese.
• This “mountain Brie” is a natural for any cheese plate, on sandwiches or simply enjoyed with fresh fruit and bread.
• Pairs well with Champagne or sweet Sherry.

Come sample these cheeses in stores now and vote for your favorites!

*Message and data rates may apply. Periodic messaging. Text STOP to cancel, HELP for help to 55955. By signing up you agree to receive marketing text messages, which may be sent through an automatic telephone dialing system, from Lunds & Byerlys at the mobile number provided. By signing up, you are confirming you are over the age of 13. Opt-in not required as a condition to purchase goods and services from Lunds & Byerlys.