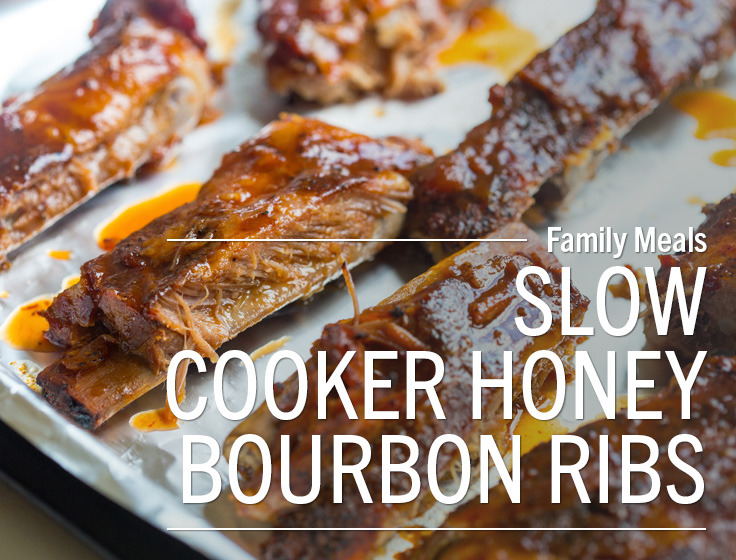 While I do 98% of the cooking in our house, my husband has three specialties: smoked pulled pork, smoked brisket and smoked ribs. As you can tell, he likes to smoke meats. Ever since he received an electric smoker for his birthday a couple of years ago, he’s been obsessed with perfecting his recipes.

Since he’s the main man when it comes to ribs, I’ve only cooked them myself a handful of times. The problem with always relying on my husband to smoke ribs is that it’s kind of a hands-on process, as the smoker is not a “set it and forget it” deal like a slow cooker. You have to be around to make sure the temperature remains steady, add more smoke chips (if you have an electric smoker), wrap it in foil after a certain amount of hours, and a few other things that my husband does and I don’t pay attention to. It’s a process.

Even though I knew my husband’s ribs were going to be difficult to beat, I wanted to take my shot at it and make them in the slow cooker. Could I make ribs that were just as good without all the hassle of the smoker? I was determined to find out.

I’m happy to report, this recipe for Slow Cooker Honey Bourbon Spare Ribs turned out SO good, it’s very possible that I’m going to be in charge of the ribs from now on. We were both blown away at how good they were! They were incredibly tender – the meat fell right off the bone! – and they were full of great flavor.

For this recipe, I used spare ribs instead of baby back ribs, because they are a little meatier and wider than baby back ribs. Either would work, though. While we usually smoke baby back ribs, I was actually really impressed by the spare ribs! They had a ton of meat and were incredibly tender.

For the rib prep, I simply used my favorite store-bought rib rub, which I applied the night before to let the flavors really get into the meat. I was okay using a store-bought rub because the real show-stopper of these ribs is the homemade honey bourbon BBQ sauce. It seriously makes these ribs unforgettable! The homemade sauce really is quite simple, too. You could even make it ahead of time and store it in the refrigerator to make prep for these ribs even easier.

I slathered the ribs in about half of the BBQ sauce before cooking them, and then also afterwards. The one complaint that I’ve heard people make of slow cooker ribs is that they don’t get crispy like they would in a smoker. To get a little bit of crispiness in these ribs, I put them in the oven at 400 F for 10-15 minutes. Problem solved!

I think this recipe would be awesome for when you’re hosting a party, a weeknight dinner or a special occasion for any rib lover in your life. It won’t disappoint!

4-6 servings
Preparation time: 45 minutes + overnight rib rub, then 4-9 hours in the slow cooker, depending on your slow cooker setting.

To prep the ribs:

To cook the spare ribs: