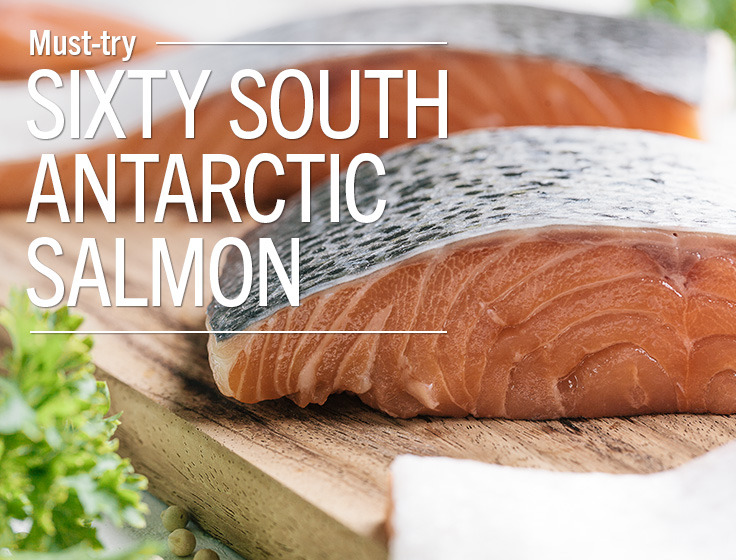 When it comes to offering you fresh seafood, we pride ourselves on seeking out the most environmentally aware partners. It was through this due diligence that we teamed with Sixty South, who is not only an extremely responsible salmon producer, but also has perhaps the most captivating background story.

Sixty South holds the second highest rating in the world from the Monterey Bay Aquarium Seafood Watch, the foremost consumer advocate on seafood sustainability. They are also among an elite group of producers that are 100% certified by the Aquaculture Stewardship Council (ASC), the preeminent judge of superior farming practices. However, to fully understand Sixty South’s level of quality, it’s perhaps most important to learn about the farmers who cultivate these incredible fish.

Leaving their families behind, they board ships headed southward, riding up to 12 hours toward a landscape that’s as isolated as it is beautiful. They arrive in Tierra del Fuego’s Alberto de Agostini National Park, situated at the very tip of Cape Horn’s Antarctic region, some 900 miles south of the closest city. Towering mountains drop directly into the extremely deep, blue water. Sparkling fjords wind tightly between jagged cliffs. It’s a breathtaking backdrop that matches the original vision that led to the creation of Sixty South. From day one, their mantra and mentality has been to “Think Like Explorers,“ testing all boundaries to see what new breakthroughs they might discover.

These are the southernmost salmon farms in the world.

Sixty’s South’s farmers aren’t just drawn here by a job. These are the southernmost salmon farms in the world, so going home at the end of the work day isn’t even an option. Instead, they will spend 10 to 15-day rotations in this remote outpost. There are 17 floating farms in the island area. The remoteness prevents them from frequently bringing in food, so trained chefs manage all the arrangements, right down to baking fresh bread from scratch each day.

This affords the team the chance to have communal meals, bonding over discussions of their detailed work and their personal lives. Farming in such a remote and inhospitable place calls for a very particular type of person, someone who is extremely driven by their unique challenge in life – someone who’s ready to take all the necessary steps, not just do what’s convenient.

Sixty South salmon has superior flavor and is sustainably raised with no added hormones, growth promoters or antibiotics, ever.

The result: some of the best salmon you’ll ever eat! Sixty South salmon has superior flavor and is sustainably raised with no added hormones, growth promoters or antibiotics, ever.

Look for Sixty South salmon in our Seafood Department and taste the difference for yourself.