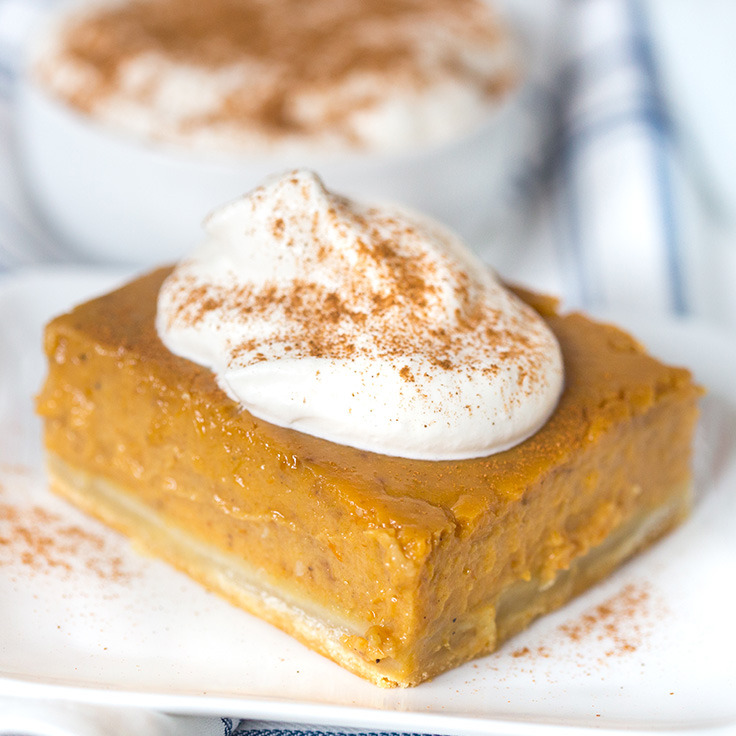 Even though I bake with pumpkin a LOT during the fall months – making countless batches of pumpkin muffins, pumpkin bread, pumpkin cupcakes, pumpkin cheesecake, pumpkin you-name-it – it’s been years since I baked a pumpkin pie. You know, the original pumpkin treat which began all the pumpkin hype. The pumpkin pie is like the #PSL’s great-great grandma.

The thing is, pumpkin pie seems to have only one day of the year when it’s appropriate, and that’s Thanksgiving. I wanted to make something that was pumpkin pie-like but a little more acceptable all fall long.

Not only do these bars fit in any day of the pumpkin season, but they also seem less fancy and much easier than pie. To me, it’s a relief to not have to mess with making the pie crust edge pretty. I suppose my lack of trying isn’t doing anything to refine my pie crust skills, but if there’s a way to get around it, count me in. So, bars it is!

The crust of these bars is an all-butter pie crust, keeping them essentially identical to a traditional pumpkin pie. To jazz the bars up a bit, I made a lightly sweetened maple whipped cream topping that complements the pumpkin spices perfectly.

Speaking of those pumpkin spices, I have to say that in the two times that I tested these bars, the spices are what I played around with. The first time I used a jar of pumpkin pie spice, and I just wasn’t blown away by the flavor. It made me think that maybe that’s why some people don’t like pumpkin pie – it lacks flavor. The second time I used my own combination of cinnamon, ginger and nutmeg, and the results were much better!

The second time around I also set aside about ½ cup of the crust dough and added little leaf and pumpkin cutouts to the edges. It was a cute touch that added a little fall flair, but definitely not necessary.

To make the crust:

To make the pumpkin pie: