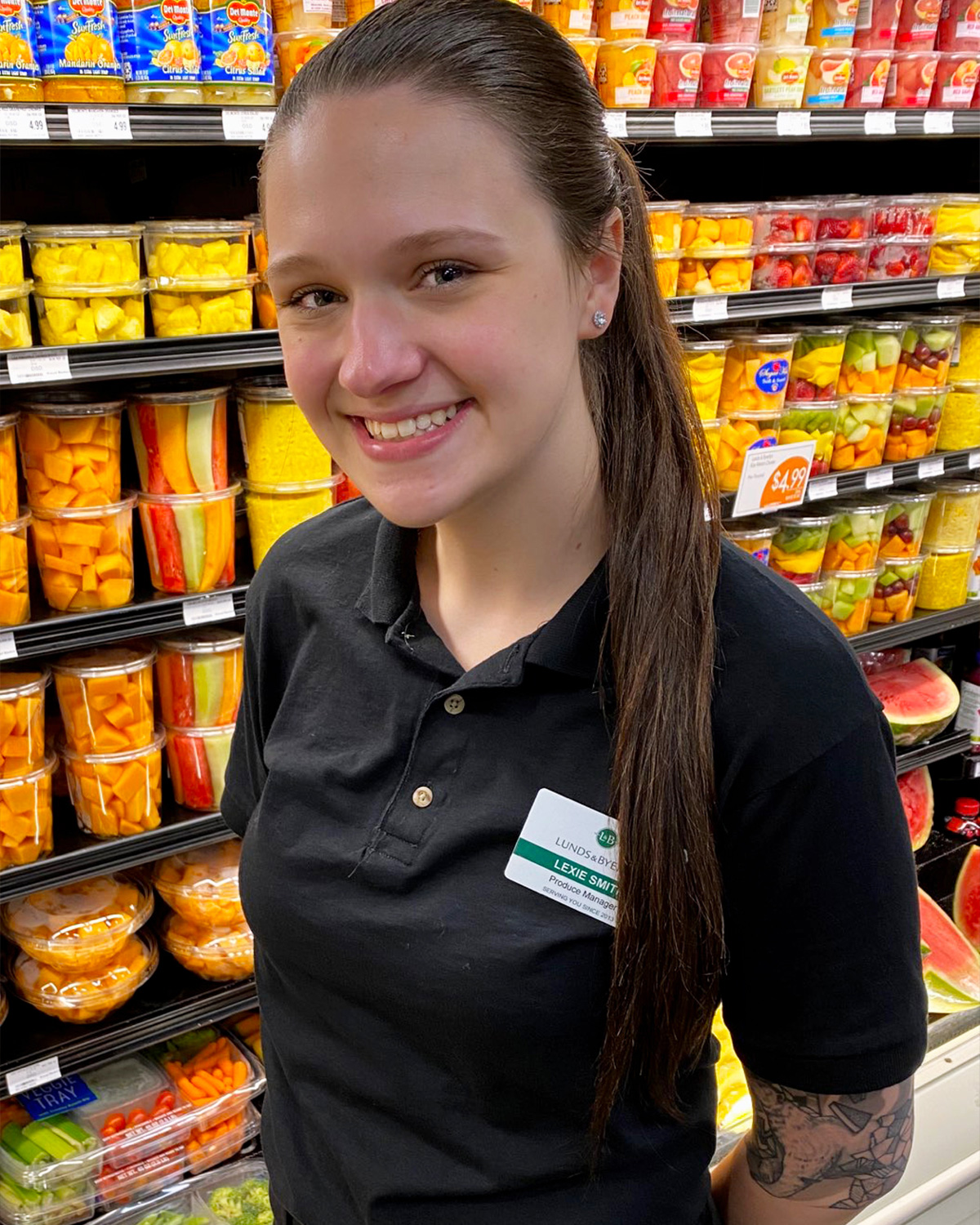 At 16, Lexie Smith wanted a way to earn money that wasn’t doing chores around the house. So when she saw that Lunds & Byerlys was hiring a bagger, she applied and got the job. Little did she know that her summer excuse for escaping domestic duties would turn into a career.

Eight years later, she manages the produce department at our Golden Valley store — and she’s not going anywhere. In fact, she’s never even considered it.

“I’ve never even had one of those ‘No! I’m done with this job!’ moments,” says Smith, now 24. A lot of her friends who work at other places have jumped from job to job, often citing coworker or management complaints. But Smith has nothing but praise for her managers and her team. “My general manager and my manager, they are really caring about me personally and they really care about employees’ mental and physical health. They don’t want you to be here just to be here. Overall, it is a great company to work for.”

It’s not just the management team that keeps Smith at Lunds & Byerlys. She loves the fast pace, too. “I have a really good work ethic and I like to go, go, go,” she says. “And you’re constantly busy here. Someone pretty much always needs your attention,” she laughs.

Her managers noticed her work ethic right away and, when she turned 18, they asked her to become a supervisor. She’d been given small supervisor-level responsibilities during her time as a bagger and cashier, and she was excited to make the leap to a full-time supervisor role. “I was 18 and I was nervous to have all the responsibility at first,” says Smith, who commutes to Golden Valley from Monticello. “But it was really fun.”

In 2018, she went through the Lunds & Byerlys Leadership Readiness Program (LRP) and was promoted to department manager. LRP teaches employees essential management skills such as how to run a department, supervise workers, handle financial details and how to order. “It is a manager-in-training program,” says Smith. She learned how to handle the store’s large produce department and how to effectively manage a team of people. “We have a great team,” she says. “We all do what we have to do every day.”

Fruits and Vegetables in the Time of Covid

The pandemic has brought changes to the produce department, but Smith and her team have risen to the challenge. During the beginning of the coronavirus pandemic this spring, food shortages, including many produce items, became more prominent. At the same time, restaurants were shutting down and people were cooking more at home. Smith and her team worked to reassure scared customers, all while Smith herself had just returned from maternity leave and had her own fears and worries. Coming back from maternity leave can be challenging in normal times. Doing so at the onset of the coronavirus pandemic added an even higher degree of difficulty.”

“It was nice to be back at work at first — to get out of the house and interact with people again,” says Smith. “But then this crazy thing happened and I was nervous to be on the front lines. I would get home from work and see my daughter but have to take a shower before I could hold her. It was very nerve-racking.”

Smith is more comfortable now and customers are, too. She’s noticed that questions about how to cook with different types of produce are on the rise, and customers are experimenting with new foods. One example: curly endive. “We never went through very much of it before,” says Smith. “Now we go through a case or two a week.”

As a produce insider, what are Smith’s favorite selections? “I’m a big strawberries and apples person, but I’m not that fond of veggies,” she laughs. “I’m a picky eater.” Her finicky palate is one of the reasons she misses being able to offer customers a taste of foods they’re unfamiliar with or think they won’t like, which is something she did often before the pandemic. (The practice is on hold right now for safety.)

“People are normally super excited to try something new, and they typically end up buying it because it tastes pretty good,” she says. Getting to sample new foods has worked its magic on Smith herself: “When we get new items, we’re allowed to try them. That’s how I started to love dragon fruit. We cut it open and I tried it and it was super good.”

Store manager would be the next step on Smith’s career ladder, but for now she’s happy where she is. “With the life change of having a baby, I’m content with what I’m doing,” says Smith. “Right now, I’m very content with my job.”