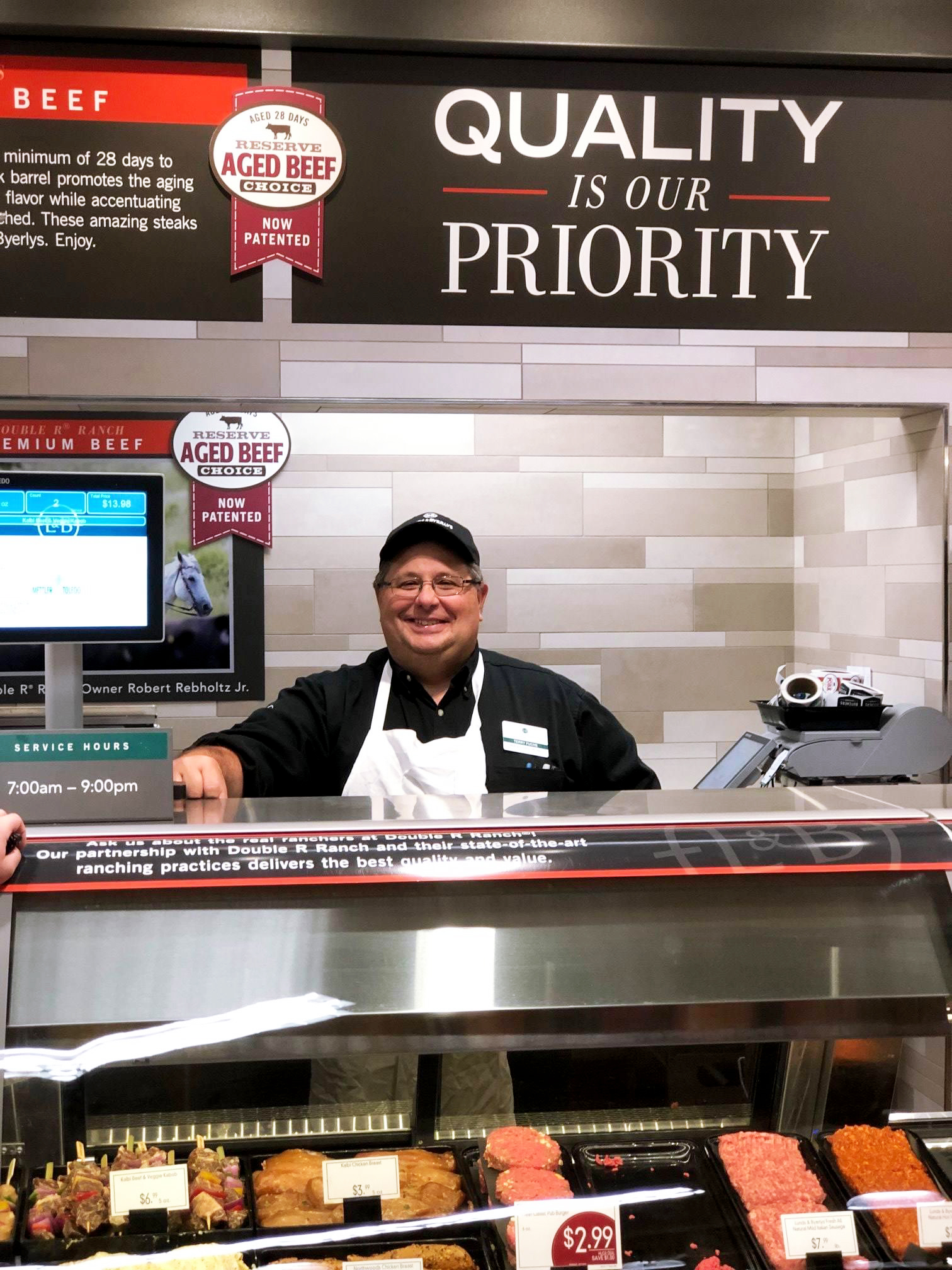 If you’ve ever watched a historical drama and envied the jaunty medieval king eating a giant cut of meat straight off the bone, Terry Fuchs, a meat and seafood specialist at our Woodbury store, has great news for you: the meat cutters at our stores can trim the meat off the end of a lamb, beef, veal or pork bone for you — a process called frenching the bone — so you, too, can eat like a king.

“People will come in and ask for big, huge tomahawk steaks, where we take all the meat off one end,” he says. “They want the shock-and-awe look of it.”

If a frenched cut of meat is the type of fanciness you’ve been looking for all your life, Terry recommends calling the store and placing a special order. Our meat cutters can always make the cut, but they don’t always have meat with an extra long bone on hand, so they may need a day or two to get it.

When it comes to meat and seafood, Terry knows his stuff — different cuts, different meats and many, many longtime customers. He’s worked as a meat and seafood expert for over 30 years, spending 25 of them at the Rainbow Foods. When Lunds & Byerlys bought the Rainbow in 2014, “they hired me and the whole meat-counter staff,” he says. “It was a really positive experience.”

Terry was drawn to his profession after growing up raising livestock on a hobby farm in the Afton area. He studied meat processing at trade school and, after a short stint at another store, started work at Rainbow. Helping customers is one of his favorite parts of the job. “I like people,” he says. “I love to visit with people, and I like establishing relationships with customers.”

A frenched cut of meat might be the most cinematic of the specialty cuts, but it’s not the only one. “We can give customers whatever cut they want,” he says. “We can customize it.” Want a porterhouse steak cut 2½ inches thick? Check. Pork chops stuffed with cashew wild rice stuffing? Check. Want a specific side of the loin? Check.

Customized cuts aren’t the only reason to visit the meat and seafood counter. “When we cut meat right in front of the customer, it feels fresher,” says Terry. And you can ask for things you don’t see in the display case. “If you want a specialty fish that you don’t see in our counter, we can usually get it within 24 hours.”

Terry runs the Woodbury meat and seafood department, where he works with four full-time and two part-time staff members. He likes and appreciates his job, in large part because he feels respected and trusted in his position. “At Lunds & Byerlys, you feel appreciated, and you feel like you’re really good at your job,” he says. “They train you and spend a lot of time developing your knowledge of the products they carry compared to other companies.”

As part of his job, Terry has flown across the country to visit meat processing facilities to see that animals are treated humanely and to get hands-on training. “They flew us to Pennsylvania so we could see the hatcheries, grow-farms and processing facilities,” he says. “We know firsthand where our meat comes from. Not a lot of people can say that.”

The Lunds & Byerlys meat buyers and merchandisers really look into the products we carry, he says, and that sets our meat and seafood departments apart. “I want customers to know that, all the way across the board, from fish to meat, our products are responsibly sourced and humanely raised, and our growers follow best practices for the environment and the animal itself.” He’s proud to work for a company with such high standards.

Another reason Terry loves his job is the culture at Lunds & Byerlys. “Working for Lunds & Byerlys, you feel like you’re part of a family,” he says. “It’s just how you’re treated.” He, in turn, passes that feeling along to his customers.

“I have some regulars who come in,” he says. “One customer comes in every Friday for a tenderloin and a crab cake. A couple comes in every Saturday morning to get 2 pounds of ground beef. When Louise comes in, we always talk about family.”