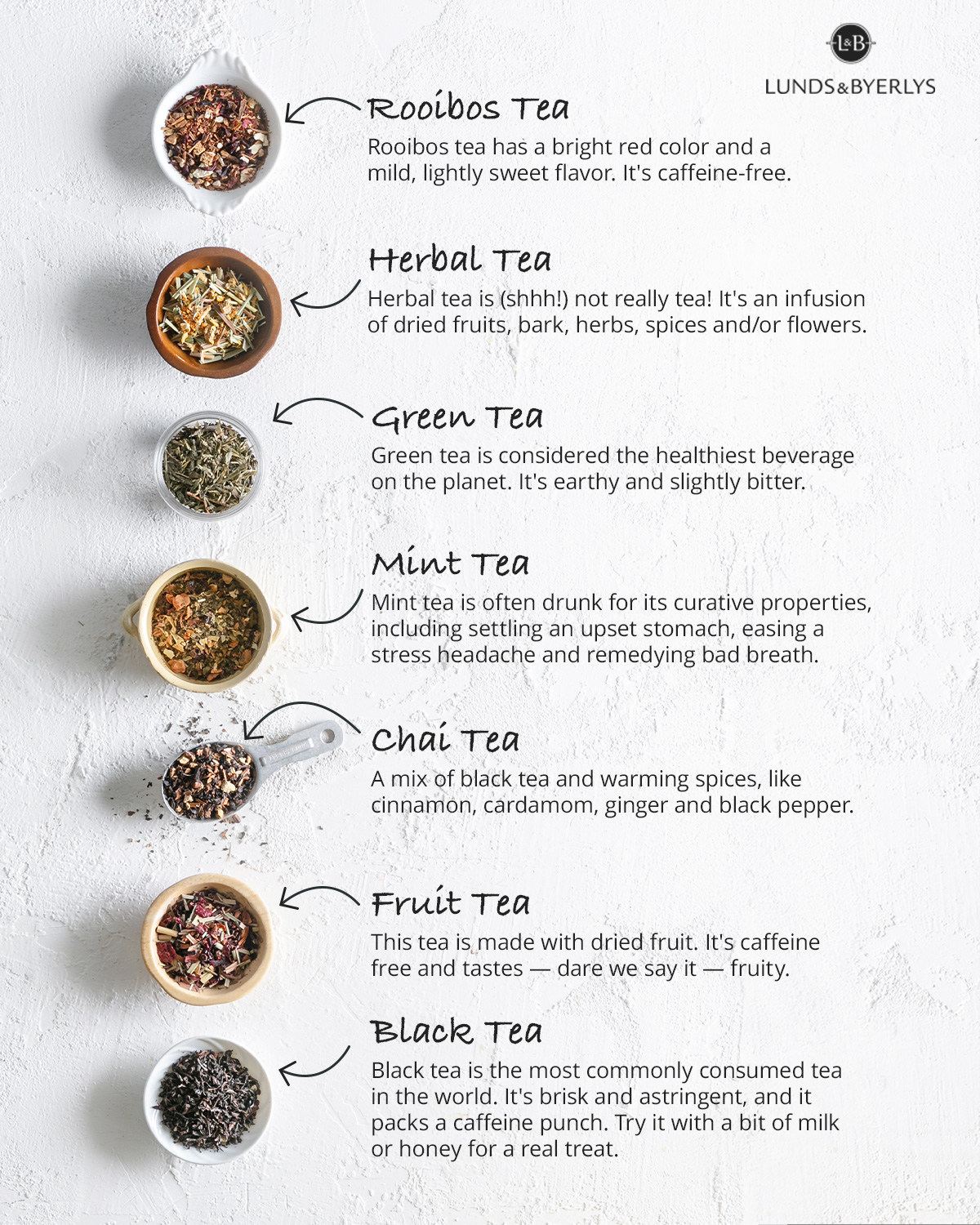 Here in Minnesota, we’ve been drinking coffee since time immemorial. It’s the beverage that’s fueled a thousand church basement conversations, and it remains as fashionable as ever.

What about that other energizing beverage: tea? Do Minnesotans drink it? (Yes.) Is it good? (Yes.) Can it grease the wheels of good conversation like a strong cup of coffee? (You betcha!) Tea is the quiet superstar of the beverage world. It’s got a storied history, a host of health benefits, an adoring fan base and endlessly nuanced flavor notes. And it comes in a wide range of types, as we’ll explore here, so there’s a tea out there for everyone.

A Brief History of Tea

As legend has it, tea was discovered some 5,000 years ago by Chinese Emperor Shen Nung. It’s said that some tea leaves caught in the wind and landed in his pot of boiling water — and, voilà! — the world’s first pot of tea. The emperor enjoyed the taste of his newfound beverage and he used it as a curative: he was a botanical explorer, the story goes, and each time he accidentally poisoned himself with a concoction, he would heal himself with tea.

Afternoon tea became a thing in 1840, when a British Duchess named Anna Russell realized she couldn’t make it all the way to dinner without something to tide her over. Because late dinners were in vogue in Victorian England, Ms. Russell needed a pick-me-up around 4 p.m., so she started brewing up a pot of tea every afternoon to ward off “that sinking feeling” and keep herself upright until dinner.

Today, tea is the most widely consumed beverage in the world next to water, according to the Tea Association of the U.S.A. Eighty percent of U.S. households have tea in their cupboards and over 159 million Americans drink tea on any given day. That’s roughly half the population of the United States.

Tea comes in a wide variety of types and flavors. Here’s a tour of some of the most popular and delicious options.

Rooibos is a slightly sweet, slightly earthy tea with a deep red color. Going by looks alone, you’d think rooibos is bursting with pungent flavor, but it is mild, mellow and refreshing — a highly drinkable drink. The rooibos bush is native to South Africa, where it still grows today, and the smooth, hot beverage made from rooibos leaves was first popularized by 18th century Dutch settlers in the region. They prized rooibos for two reasons: it was easy to drink and it was cheaper than black tea, which all the cool, wealthy kids were drinking at the time.

Rooibos doesn’t have caffeine, yet some people report feeling more focused and energized after drinking it. Rooibos is also free of tannins, plant compounds that give black teas their hint of bitterness, and oxalic acid, which can lead to kidney stones. Bonus: rooibos is packed with health-promoting antioxidants.

Red tea won’t turn bitter as it steeps, so you can leave the tea bag in the water for a few minutes — or an hour — and still have a delicious (if cold) cup of tea. We added orange spice to our L&B Organic Rooibos for an unforgettable flavor.

Herbal teas are many things — refreshing, uplifting, soothing, palate-cleansing, flavorful, fruity, earthy, elegant, nuanced, delightful — but technically speaking, they aren’t really tea. (The same is true for rooibos.) All “true” tea is made from the leaves of the Camellia sinensis bush, but herbal teas, like hibiscus, chamomile, ginger or mango (to name just a few), are made from dried fruits, bark, herbs, spices and flowers, making them herbal infusions, or tisanes, rather than tea.

But just like we treat tomatoes as vegetables (even though they’re fruit), we treat tisanes like tea. They’re prepared the same way: by steeping the dried plant material in hot water. Herbal teas come in as many flavors and varieties as you can imagine, and you can choose them based on taste or specific function. Many teas are crafted with an end goal in mind — to help you fall asleep or relax or digest food or overcome constipation — so you can enjoy them for the taste or as a health-promoting elixir. We crafted our L&B Organic Turmeric Ginger Herbal Tea with both in mind.

To make a cup of herbal tea, steep loose-leaf tea or prepared tea bags in hot water according to the directions on the package.

Green tea is one of the “true” teas, as it’s derived from the Camellia sinensis bush, and can take on different flavor notes based on where it was grown, how it was harvested, and how it was processed. That’s why you’ll see different types of green tea, like bancha, sencha and matcha, on store shelves. While each one is slightly different, most green teas are earthy, slightly bitter and astringent, which is the quality that creates a dry feeling in your mouth.

Green tea is perhaps best known for its potent health benefits. It’s considered one of the healthiest beverages on the planet and has been linked to everything from helping with weight loss to protecting against cancer.

Green tea contains caffeine, but it’s associated with a much milder buzz than the caffeine jolt conferred by coffee. Green tea also contains an amino acid called L-theanine, which can soothe anxiety and promote relaxation. Research suggests the caffeine and L-theanine in green tea may work together to help improve focus and overall brain function.

To make green tea, bring hot water to a boil and then let it cool for two minutes. You want water that is slightly off the boil for green tea so the water doesn’t burn the delicate leaves. Steeping time will depend on the particular tea and your personal preference, but as a general rule, most green teas steep for 2 to 4 minutes. Our L&B Organic Sencha Green Tea makes a vibrant, flavorful cup.

Mint tea is an herbal infusion, not a “true” tea, but that doesn’t stop it from being truly delightful. It’s made from dried mint leaves and enjoyed both for its taste and curative properties, including its ability to help with digestion, quiet an upset stomach, curb an appetite, ease a headache and boost one’s concentration. It’s bright and refreshing and, dare we say it, positively minty. Steep mint tea for several minutes, or let leaves linger even longer. The mint flavor will become stronger with time, but it won’t turn bitter. Mint tea is caffeine-free. We added a little something extra to our mint tea to give it more complex flavor notes and make a truly intriguing cup.

Chai is black tea blended with spices and served with warm or steamed milk and honey. Chai is a mainstay in India, where the most common preparation is one we’re familiar with here — brimming with warm spices like ginger, clove, cinnamon, cardamom and black pepper. Some chai blends have more spices, like nutmeg, fennel, coriander and star anise, while others dial back the spices, adding only cinnamon and cardamom, for example. The type of black tea most often used as the base for chai is Assam, which is grown in the Assam region in northeast India.

Chai can be purchased as loose-leaf tea, in tea bags, as a concentrate or as a dried powder. Read labels closely to find out which spices are in a specific chai, and check to find out how long to steep it. Set a timer if you’re worried you’ll forget the tea bag in hot water. Chai contains caffeine and tannins, so it will become over extracted and bitter if left to steep for too long. We included all the classic spices in our version: L&B Organic Bombay Chai Tea.

Fruit-based herbal teas are just that: herbal infusions made with dried fruit. They’re bright and refreshing, and they don’t contain caffeine, so they’re great for drinking as a palate-cleansing digestif or a cozy evening refreshment. You can steep them in boiling water for as long as you like without fear of over extraction. Try our caffeine-free L&B Organic Apple Cranberry Tea. It tastes like coziness in a cup.

Black tea is the most commonly consumed tea in the world. It is a “true” tea made from the leaves of the Camellia sinensis bush. Different types of black tea come from bushes grown in different regions. For example, Ceylon tea is made from Camellia sinensis bushes grown in Sri Lanka and Darjeeling tea comes from bushes grown in the foothills of the Himalayas in northern India. Some black teas are created by adding a flavor or spice. Earl Gray is a black tea (often a Ceylon) with added bergamot oil. Our L&B Organic English Tea is rich, robust and invigorating.

Black tea has caffeine and is rich in tannins, so follow the steeping instructions on the package to make sure you don’t over extract the leaves. Black tea can stand up to boiling water, so no need to let the water cool before steeping.