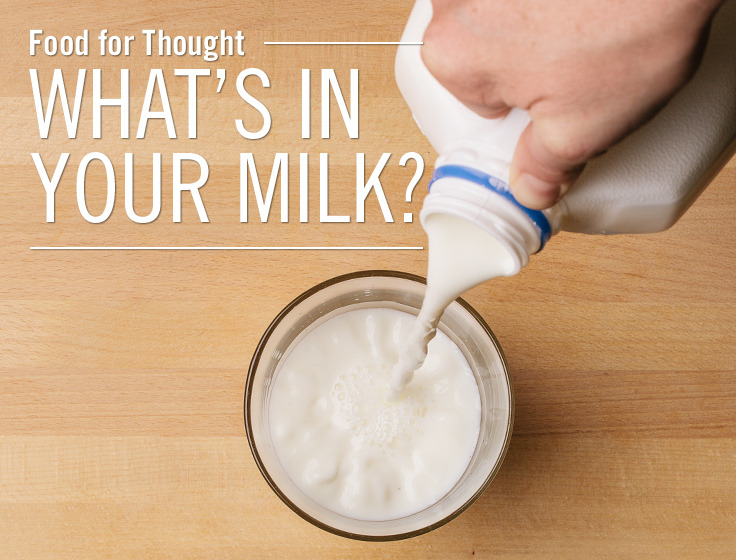 What’s in your milk?

Bea James, our senior manager of organic, natural, health and wellness, shares some important facts on the controversial growth hormones in milk.

OK, before you read this you should know I’ve researched this topic since 1997 and believe truth in labeling is one of the most important issues for consumers. People can choose the products they want; however, they should know what they’re buying. It’s been my experience that companies not using controversial ingredients will tell you, usually right on the package (i.e. GMO free), while companies using controversial ingredients most likely won’t tell you.

So read on my friends and learn about rBGH, an ingredient that you may not know you’re consuming.

Most consumers aren’t aware of the fact that cow’s milk, and products that contain cow’s milk, may contain the controversial recombinant bovine growth hormone rBGH. This is a genetically engineered, synthetic version of the cow’s naturally occurring protein hormone, bovine somatotropin (BST).

Monsanto, a large scale agriculture company, developed a recombinant version, rBST, in 1993 by using a genetically engineered E. coli bacteria. It was the first rBST (also known as rBGH) approved by the FDA. It’s injected into cows to boost milk output in the short term – up to 15 more pounds of milk per cow, per day.

Critics of rBGH argue nature’s perfect food just hung a left at the drug store. They say rBGH puts an unyielding amount of stress on the cow by speeding up the cow’s milk production to an unnatural producing pace and, at the same time, stressing the cow’s natural metabolism, which often results in illness. According to the Canadian Journal of Veterinary Research, cows treated with rBST face a nearly 25% increase in the risk of clinical mastitis, a 40% reduction in fertility and 55% increased risk of lameness. Often these illnesses result in antibiotic use that can also get into the milk.

Supporters of rBGH use argue the drug is a naturally occurring substance, the extra milk is needed to feed the hungry world-wide, and that increased milk production will make farmers more competitive.

While the debate continues on, there are ways to avoid rBGH if you so prefer by purchasing organic brands or brands that choose to voluntarily label their products as being “from cows not treated with rbST.” The federally mandated USDA National Organic Standards prohibit the use of synthetic hormones to promote growth or increase production and have a rigorous system for inspection, certification and verification, which protects consumers from false claims.

If you, like me, believe labels should not be misleading, you can fight back with your pocket book by purchasing organic and rBGH-free labeled products.

Look for these brands in our stores for rBGH-free dairy products: