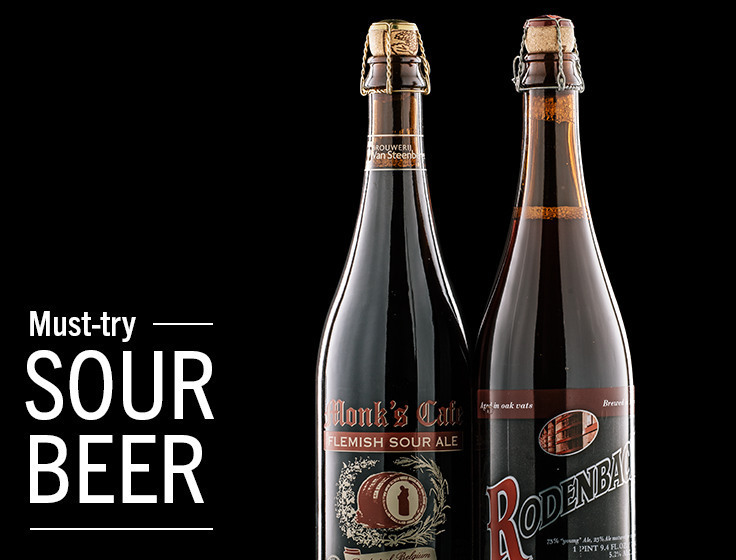 If you haven’t tried a sour beer yet, now is the time to try one! These unique beers – often Belgian-style brews – are known for their intentionally tart taste, caused by the introduction of wild yeast strains and bacteria during the fermentation process. Because of the uncertainty of wild yeast, brewing sour beer can be an unpredictable process, taking months to ferment and years to mature. But the result? An unforgettable beer like none other you’ve tried before!

Rodenbach Classic Aged Sour Belgium Beer
This is a sour ale blend of ¼ aged “mother beer” – which has matured in oak at least two years – with ¾ of a younger, sweeter counterpart. Aromas include sour cherry, vinegar, dark berry, green apple and grape with notes of wood, vanilla and red wine. Pairs well with fish, sushi, mushrooms, pasta and cheeses; or try with roasted chicken or even strong game meat.

Monk’s Café Flemish Sour Ale
Mildly tart sour ale. Light bodied with a lactic/sour nose and a bit of sweet and sour in the finish. Very refreshing. Pairs well with Asian, spicy Mexican and even salads.

Boulevard  Brewery – Tell Tale Tart Sour American Wild Ale
Subtle acidity is answered by a soft, biscuit malt character, making this sour ale that suggests, rather than announcing, its tartness. Beginning with a bracing sharpness at first sip, the ale mellows on the palate to a smooth and faintly lingering finish.

Destihl Brewery – Here Gose Nothing Leipzig-style Gose
The beer undergoes a spontaneous fermentation, similar to Belgian-style Gueuze/Lambic beers, and
exhibits a complexity of acidic flavor and aroma contributed by wild yeast lactic fermentation. Lemon, lime and other citrus-like qualities are present in aroma and on the palate, which is balanced by the spicy character of added coriander and a mineral-mouthfeel from added sea salt.

Look for these sour beers at your local Wines & Spirits location!