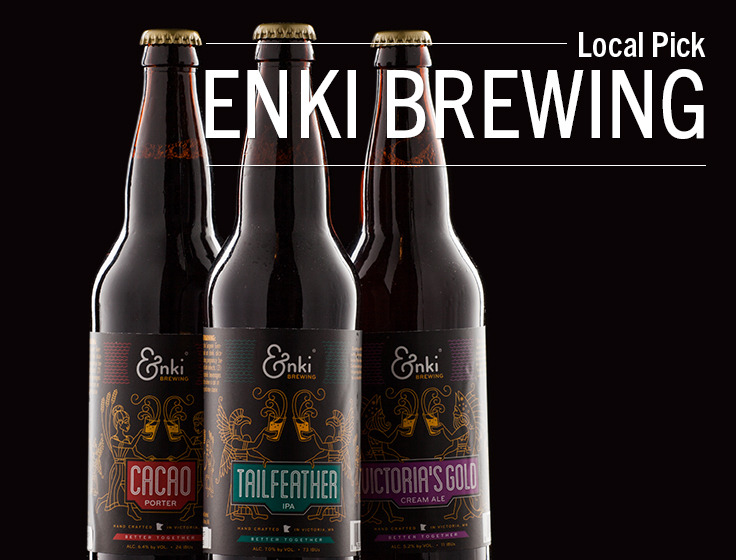 The story behind Minnesota’s own Enki Brewing

Longtime friends Dan Norton and John Hayes were running partners, coworkers and drinking buddies. In
2012, they found a 100-year-old creamery building in Victoria, Minnesota, and followed their dreams of creating their own brewery and taproom. Since 2013, they have been brewing 20-barrel batches of beer and delivering it to local bars, restaurants and liquor stores.

Along with flagship beers Tail Feather IPA and CACAO Porter, Enki produces a wide variety of year-round and seasonable beers that have become hugely popular in the taproom and at local establishments, including Victoria’s Gold Cream Ale, Hootnanny Hefeweizen and Warming Hut Brown Ale.

Wondering where the name Enki comes from? 7,000 years ago in ancient Mesopotamia, ENKI, the Sumerian god of flowing water, brought fresh waters down the Tigris and Euphrates Rivers to the Fertile Crescent, prompting the growth of nutritious grains – from spelt to farro, teff, kamut, chia and quinoa. It was there that people would congregate, forming the beginning of civilization. They quickly found that grains and water, along with the mystical powers in the air, spontaneously produced a delicious and invigorating beverage – that we know as beer. Ever since, beer has been the sustenance of life and the spirit of celebration.