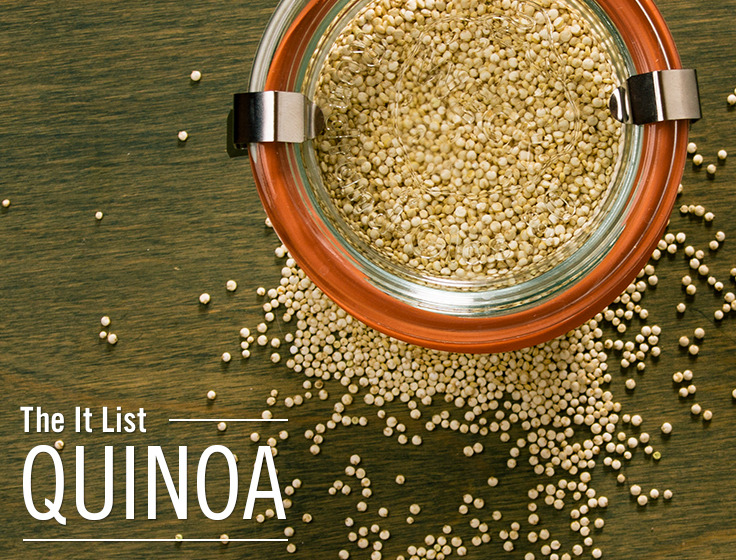 Did you know that 2013 was declared “The International Year of the Quinoa” by the Food and Agricultural Organization of the United Nations?

Quinoa (pronounced “KEEN-wah”) is everywhere. It’s easily-prepared, nutrient-rich and really versatile, delicious in recipes ranging from breakfast to dinner. However, quinoa is far from new – it’s been around since approximately 3,000 BC in the Andes mountains regions of South America, where most of our quinoa still comes from today.

Quinoa is not a grain like wheat, oats, barley or rye; rather, it’s a member of the same food family that contains spinach, Swiss chard and beets. It has a remarkable tolerance for different growing conditions, able to survive high altitudes, thin and cold air, hot sun, salty or sandy soil, little rainfall and sub-freezing temperatures. In addition, all parts of the quinoa plant can be eaten, including not only the seeds that we buy in the store, but also the leaves and stems. Quinoa leaves taste similar in flavor to spinach, chard, and beets.

Some other benefits of eating quinoa:

To cook, add one part quinoa to two parts liquid in a saucepan. After the mixture is brought to a boil, reduce the heat to simmer and cover. One cup of quinoa cooked in this method usually takes 15 minutes to prepare. Remember that it will expand during the cooking process to several times its original size.

When cooking is complete, you will notice that the seeds have become translucent and the white germ has partially detached itself, appearing like a white-spiraled tail. Cooked quinoa seeds taste delicate and somewhat nutty. They’re fluffy and creamy, yet also slightly crunchy.

If you would like your quinoa to have a nuttier flavor, you can dry roast it before cooking. To dry roast, simply place it in a skillet over medium-low heat and stir constantly for five minutes.

Look for quinoa in our grocery aisles.