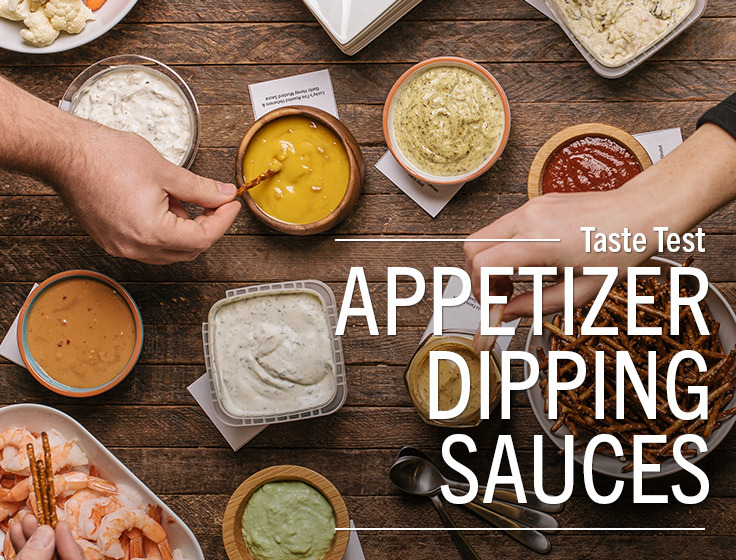 When it comes to party food, some people may argue that the most important thing is finding the perfect appetizer. However, we’re firm believers in the power of a good dipping sauce.

Dipping sauces take simple appetizers to the next level. They add a little zing to veggies, give crackers some pizzazz and bring out the depth of flavors in meat and seafood. So, in the interest of parties everywhere, we sampled nine different dipping sauces with pretzels, veggies and shrimp, to see which ones came out on top!

L&B Meyer Lemon & Shallot Cocktail Sauce
One of our testers immediately asked, “Does anyone eat cocktail sauce with anything besides shrimp?” It was a good question! For the most part, none of us had ever considered this sauce paired with other foods – but today we were willing to try. Turns out, there’s a reason people prefer shrimp. Pretzels were definitely a no-go. When it came to veggies, broccoli got an “interesting…” and carrots only got a “meh.” Our testers agreed that this classic cocktail sauce paired best with shrimp (no surprise there!). Lively and flavorful, L&B Meyer Lemon & Shallot Cocktail Sauce is infused with just a touch of Meyer lemon for a bright, bold sauce that perfectly balances with seafood. You can’t go wrong!

“Does anyone eat cocktail sauce with anything besides shrimp?”

Lucky’s Honey Mustard Fire Roasted Garlic Sauce
One bite of pretzel dipped in this sauce and one tester burst out with “Ooh, that’s tasty.” We all agreed – another classic combination! This zippy, robust sauce went well with pretty much everything we dipped in it, from veggies to pretzels to crackers: “Just a solid dip!” Another tester remarked that while the honey mustard wasn’t great with shrimp, it would be tasty with other seafood, such as a mild white fish. Because of its versatility, this was our overall favorite dipping sauce. It was also our favorite sauce served with crackers and pretzels.

This zippy, robust sauce went well with pretty much everything

L&B Fresh Dill Dip
This creamy, refreshing dip got thumbs up from just about everyone. “Fresh, creamy and versatile. A hard-to-beat classic!” said one tester. “Goes with everything!” said another. The dip was our overall winner paired with fresh veggies, but got a “nope” for pretzels from one of our testers. One tester commented that it was a little mayo-heavy. The general consensus, though, was that this dip was classic and dependable – a great addition to any veggie tray.

Stonewall Kitchen Wasabi Horseradish Cream Sauce
With a distinctive kick of wasabi, this zesty, tongue-tingling dip was surprisingly good with veggies. “Super versatile!” one tester commented. Several of our testers noted how salty this sauce was. “Has a good kick – but not good with pretzels,” said another person. One adventurous tester paired the sauce with the L&B Meyer lemon cocktail sauce for a double-dose of horseradish to pair with cocktail shrimp. This creamy sauce goes wonderfully with grilled shrimp, chicken or veggies, too. But if you don’t like horseradish, well, then this dip just isn’t for you.

Robert Rothschild Farm Lemon Dill & Capers Sauce
“Really lemony” was the first reaction of most of our testers. “It’s so citrusy it almost tastes spicy!” said one person. “Tangy!” said another. Overall, this sauce got mixed reviews, although we all agreed that its strong citrus taste would be best paired with seafood, such as shrimp, salmon, or lobster.

Stonewall Kitchen Lemon Herb Aioli
This sauce is a little more herb-rich and a little less intense than the Robert Rothschild Farm dip. Tangy, with a bright lemon flavor, this sauce is enhanced with just the right touch of garlic, dill and tarragon. One of the testers compared it to a béarnaise sauce. “I use this at home with fish instead of tartar sauce,” someone commented. Another person chimed in, saying, “I’m going to start buying this! I feel like it would be really good with pork tenderloin sliders.” Overall, we agreed that this sauce is best served with crab cakes, salmon or another mild fish, but could be paired with a lighter meat such as pork or chicken. If you’re feeling creative, it could also be warmed and used as a sauce over sautéed vegetables.

Lotus All-Natural Spicy Peanut Sauce
This spicy-sweet sauce was awarded Best of the Twin Cities Vietnamese Cuisine, so we went into this taste test with high hopes – and we weren’t disappointed. “It reminds me of my favorite Thai noodles,” said one tester. “Surprisingly versatile!” said another. Although one tester commented that the peanut flavor was a bit overpowering, most of us agreed that it had a nice, spicy kick. This award-winning sauce was our second-favorite overall in the taste test. It’s delicious with Asian-inspired appetizers such as mini egg rolls, wontons or lettuce wraps, but is not our first pick when it comes to simple appetizers like crackers or veggies.

“It reminds me of my favorite Thai noodles,”

GoodFoods Feta Cucumber Dip
Made with garlic and fresh mint, this cool dip paired well with fresh veggies. “I like that! That’s good!” said one tester. “A nice light, refreshing taste across the board,” said another. However, most testers agreed that the feta flavor in this dip was a little overpowering.

L&B Spinach Artichoke Dip
This classic dip was thick and creamy, with a subtle tang, and filled with chunks of artichokes and spinach. One person noted that the dip was best scooped up with veggies; another tester suggested that it might be better with cubed bread. If you’re looking for a mild, all-purpose dip, this is a great choice!

Look for all these dips and more in our grocery aisles.