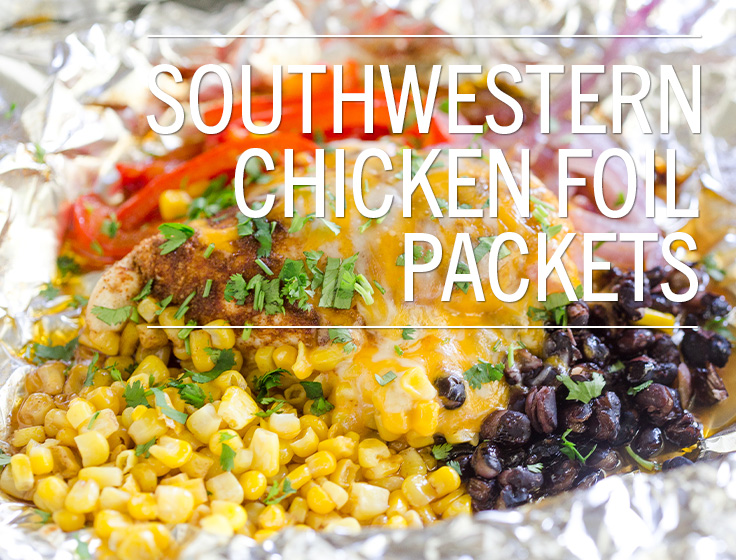 This easy yet delicious, no fuss dinner from Twin Cities food blogger greens & chocolate is bound to be a family favorite. Who doesn’t love less dishes?!

With two little boys that keep me beyond busy, I’m drawn to recipes that give me the most bang for my time. As in the ones that take me the least amount of time and get the most praise at the dinner table. When it comes to ease of cooking, foil packet dinners are always winners — the whole meal goes in the packets. The trick is getting everything to cook evenly and taste delicious. I have to say, these Southwestern Chicken Foil Packets do not disappoint.

Best of all, even the prep work happens in the foil packets — I didn’t dirty a single dish making them! Seriously, I didn’t even mix together the spices in a bowl. I just sprinkled them on individually. This chicken is just THAT easy and fool-proof.

Basically, you’re going to lay out a chicken breast, sliced bell peppers, red onion, black beans, and corn in a large piece of aluminum foil. Then you’ll sprinkle it with a bunch of tasty Southwestern-ish spices, some salt, and a drizzle of olive oil. Wrap ‘em up and they’re ready for the grill or campfire.

Southwestern Chicken Foil Packets are great for when you want an entire meal cooked on the grill, or when you need a meal idea for camping. They’ll be a crowd pleaser, for sure.

Tip: If you’re heading up to the cabin or a campground, and you want to keep it simple, you can use L&B Southwest Trail Dust Seasoning instead of bringing individual spices. One bottle instead of five!