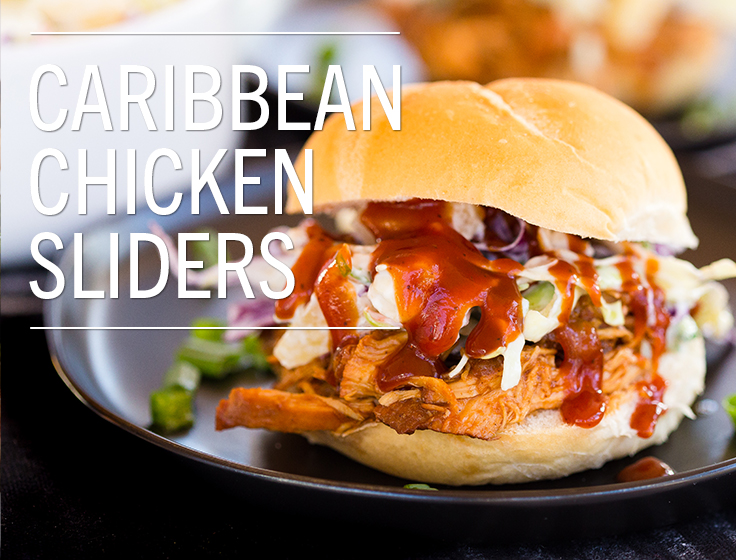 One of the few meats that my 4-year-old will eat is grilled BBQ chicken legs. He’s generally open to trying new foods, but meat has been tricky for him. Since we don’t grill much (or at all!) during the cold Minnesota winters, I wanted to try making BBQ chicken in the slow cooker to see if he would bite. Literally.

Cooking chicken breasts in the slow cooker has consistently resulted in tender and juicy meat, which gave me hope that he wouldn’t balk at tough meat. Plus, he loves BBQ sauce! And perhaps the fact that it’s sandwiched between a bun would make it more appealing. Fingers crossed.

I have to be honest here: this chicken did not win over my kid’s heart like a good ‘ol BBQ chicken leg, but it DID win over my husband, 2-year-old, and me! Not only are these Caribbean BBQ Chicken Sliders SO easy to make, they’re absolutely delicious.

This recipe for Slow Cooker Caribbean BBQ Chicken Sliders is so great for a busy weeknight. The BBQ chicken is a breeze to put together in the morning. You start by slicing up a red onion for the bottom of the slow cooker. Pro tip: I like to slice up my onions the night before and store them in a Tupperware, so I don’t have to touch (or smell like) onions in the morning. After that, all that is left is to top it with chicken breasts and L&B Carribean BBQ Sauce. This Caribbean BBQ Sauce has hints of dark rum, ginger, plums, oranges and molasses — all flavors that will take you straight to the Caribbean!

The last step in these Caribbean BBQ Chicken Sliders is making the pineapple coleslaw. I always love a good coleslaw on my BBQ chicken sliders, and the addition of pineapple is simply delicious with the hints of Caribbean flavors in the chicken.

In addition to being great for a weeknight dinner, this recipe would be great for a gathering because it’s easy to prep everything in advance, and easy for people to serve themselves.