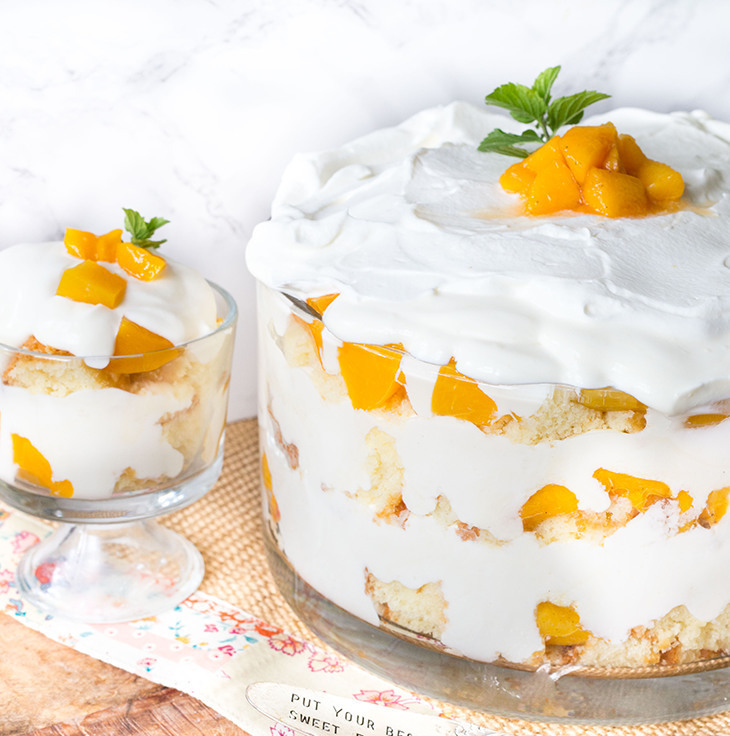 Need a dessert for a crowd? You can’t go wrong with a trifle! Twin Cities food blogger greens & chocolate has the perfect trifle recipe for summer.

Summertime is the season for barbecues and potlucks – and take one guess who always offers to bring the dessert? Yep, that’d be me. I love cooking for a crowd but I love baking for a crowd even more.

While pans of brownies and plates of cookies are great for barbecues, sometimes it’s fun to put together something a little fancier. Enter: trifles. Specifically, this peaches and cream trifle. I know people love their bars here in Minnesota, but who wouldn’t enjoy a dessert with layers of white fluffy cake, luscious vanilla pudding, caramelized peaches and whipped cream?

A couple of things about this recipe. First, I went semi-homemade and used a box of cake mix for the cake. While 80% of the time I’m all about making things from scratch, I
just feel like the boxed cake mixes are kind of hard to beat when you consider convenience and taste. Not many from-scratch recipes can get that fluffy texture and white cake taste and sometimes I don’t even care how the boxed mixes do it. So, cake mix for the win.

The pudding, on the other hand, is 100% homemade and once you make this vanilla pudding you will never look back. It’s completely worth it and especially when you consider the very minimal hands-on time, it’s a no brainer.

Also, there is homemade whipped cream (which is ridiculously easy so don’t even think about using stabilized whipped cream) which gets folded into the vanilla pudding, making it super light, super fluffy and insanely delicious. Like, I dare you not to lick the spatula.

Lastly, while *technically* you could just use some canned peaches in this recipe if you’re short on time, you cannot go wrong with caramelized peaches. I mean, butter + sugar + peaches. C’mon now. These are the things summer is made of!

All together, this peaches and cream trifle is such a fun dessert for a crowd! Not only does it look great in a glass trifle bowl, but it’s a great serve-yourself dessert. Just
grab a spoon and dig in!

For the whipped cream:

Next, make the pudding:

Next, make the peaches:

Next, prepare the whipped cream: