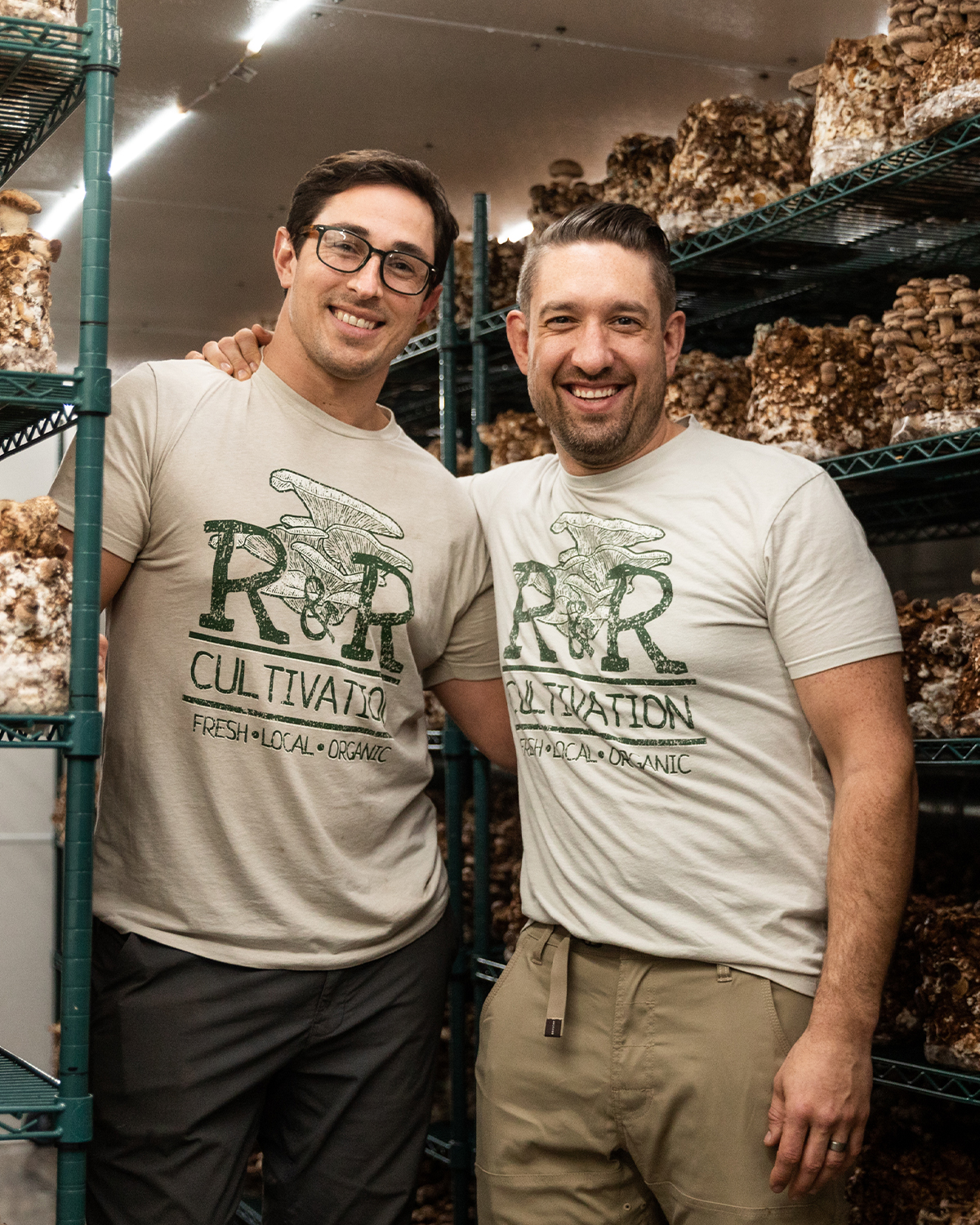 When Nick Robinson and Lance Ramm started the mushroom company R&R Cultivation in 2018, their production space was a 4’x4’ grow tent in Robinson’s basement. The space was small, but mighty: They managed to grow enough mushrooms to sell at the St. Paul Farmers’ Market. So they expanded to a couple other farmers markets around the Twin Cities, with plans to sell their mushrooms in grocery stores — one day.

“Grocery is a big pivot. It has the most barriers to entry, like packaging and having a team of people [to get them to and in stores],” says Robinson. “Restaurants are a lot easier. You just bring them a big tote of mushrooms.”

But last year, that pivot came sooner than expected. As farmers markets and restaurants scaled down during COVID-19, people turned to grocery stores more than ever before for fresh produce and wholesome meals — and R&R Cultivation worked faster than they’d originally planned to adjust to the new reality. Today, R&R Cultivation is a full-scale urban farm, and their gourmet mushrooms are available at all Lunds & Byerlys locations in the Twin Cities.

The Seeds Spores of Business

R&R Cultivation didn’t start out as a passion project. Robinson and Ramm launched the business to create meaningful work for themselves and for the community. “I wasn’t an amateur mycologist,” says Robinson, laughing at what he calls the company’s “lackluster” origin story. “I just wanted to do something good for my local community, something that provides value. When we started the business, I barely liked mushrooms.”

Today, the duo have turned their dream into reality. R&R Cultivation supplies local, organic, gourmet mushrooms across the metro and the work is rewarding. “Working with people who are part of the local food system is so freaking cool,” Robinson says.

All R&R Cultivation mushrooms are USDA Organic-certified. Getting that stamp of approval was important to the founders, but the process wasn’t easy. Companies have to meet a very high bar to earn USDA Organic certification.

“People can grow things organically, but what makes it ‘certifiable’ is that everything in the product is traceable,” says Robinson. “That means that [an inspector] could go to any Lunds & Byerlys and grab any R&R Cultivation package, and I’d have to tell them what sawdust we used to grow the mushrooms, what log we used, everything.” (Robinson calls the spreadsheet he uses for tracking growing materials “daunting.”) The certification process “was a really heavy lift,” he says. “But it made us a better company.”

Some people love mushrooms, some people are lukewarm on them — they find the texture too rubbery or the taste too earthy — and some people are 100-percent nope on these nutritional powerhouses.

If you fall into the first camp, welcome to the gourmet world of R&R Cultivation. Based in Roseville, the company grows a wide variety of mushrooms, from shiitake and maitake to pink oyster and brown beech. “Each one has its own taste [and texture],” says Robinson. “Chestnuts have longer stems and silky undercaps, so they make a great natural thickener in soups and ramens.” (Yes, you can eat the stems. “They’re full of flavor,” he says.) When prepped right, the taste, texture and umami flavor of cooked lion’s mane mushrooms make them practically indistinguishable from crab cakes. For vegetarians, vegans and omnivores looking to add more plants into their diet, mushrooms are a great meat substitute.

If you’re new to mushrooms, Robinson suggests blue oysters or shiitakes as “gateway mushrooms.” They’re the easiest to cook up, he says, and “blue oysters have such a great taste.” Or ease into mushrooms by using portabellas (this is how they spell their product) to make decadent vegetarian cheeseburgers.

If you’re in the “meh on mushrooms” camp or the “no way, José” camp, you may be reacting to the texture — and that may be a result of how the mushrooms were cooked. When cooked on low heat for too long, mushrooms develop a rubbery, slightly slimy quality that can be off-putting. The secret to perfectly crispy, flavorful mushrooms is to get your sauté pan and cooking oil very hot before adding the mushrooms, then cook them just until the edges start to caramelize.

If you’re making a dish that calls for mushrooms, Robinson suggests cooking them separately to get the best flavor and texture. “If I’m doing a risotto, I’ll cook the shiitakes and add them afterward. Then, instead of them being too rubbery, which is what a lot of people don’t like, it actually adds that little bit of crunch.” (If reading about risotto makes you hungry, our One-Skillet Creamy Chicken Mushroom Risotto is excellent.

Store mushrooms in a brown paper bag in the crisper drawer to keep them fresh, says Robinson, and don’t worry if the mushrooms start to look “kinda white and airy” on the outside — that’s not mold, it’s a natural regrowth process.

R&R Cultivation sees growth in its future. The company plans to expand its line of wild mushrooms to include morels and chanterelles and to bring in some “really fun seasonal mushrooms.” But their core commitments to quality and community will stay the same.

“We’re just a local company that puts out a good product and we want to continue to serve the community in that way,” says Robinson. “We are so happy to do what we do every single day.”