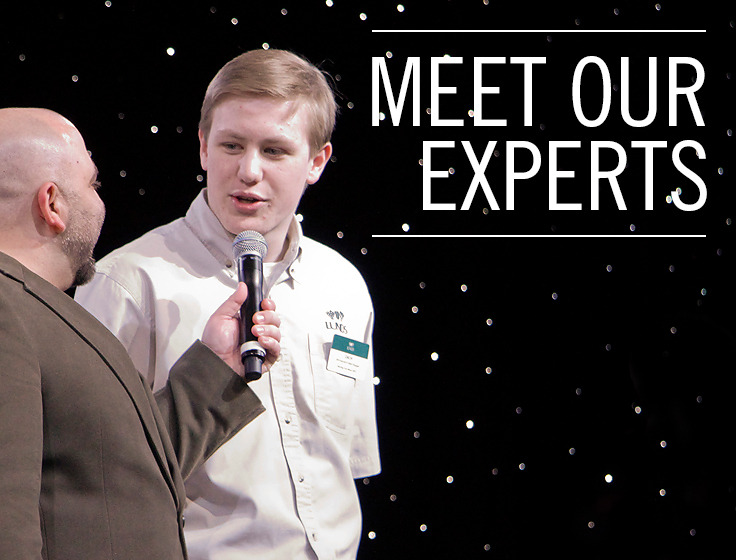 Our baggers play a crucial role in providing you a sensational shopping experience. They ensure your groceries make it home as safe as possible and provide that friendly service you expect from us. Zach Anderson, a bagger at our Lunds in Bloomington, is a pretty special bagger. Not only did he earn the title of Minnesota’s Best Bagger in 2014, but he also recently became the third best in the nation at the National Best Bagger Championship in Las Vegas!

Q: What does a bagger do?
A: We’re all about our customers. Lunds & Byerlys prides itself on customer service and I like to put that care into each customer interaction. I make sure each bag is exactly how the customer wants it, and make sure to structure the bags so nothing will break and the groceries arrive home safely.

I usually serve about 200 people per shift, jumping between lanes and helping around the store where needed. Baggers are usually the last people our customers see as they leave our stores, which makes our role even more important, as we can really complete their great experience.

Q: What do you do outside of work?
A: I’m a senior at Jefferson High School. When I’m not in school or working at Lunds, I like to stay active. Throughout high school, I’ve been in debate, wrestling and baseball. I was accepted at the University of Minnesota–Duluth this year. I’m planning on going into business management and will hopefully come back to work for Lunds & Byerlys after I get my degree.

Q: What do you like most about working at Lunds & Byerlys?
A: I love working with everyone in my store and enjoy interacting with our customers. I really enjoy all the great experiences I’ve had because of working here. Our store is like one big family.

Just the other night I was bagging one of our regular customers’ groceries and my manager was talking to her. Our customer said she was retiring that week after working for many years at one company. We wanted to do something special for her, so my manager and I thought flowers would be a nice touch. I grabbed a bouquet and before she got into her car, I presented her with the flowers and congratulated her on her retirement. She was truly touched.

Q: How did you become Minnesota’s Best Bagger in 2014?
A: In a bagging competition, you’re judged on speed, proper bag-building technique, distribution of weight between bags, style, attitude and appearance. You typically have random groceries in front of you that you need to distribute between three reusable bags. It’s intense!

Each Lunds & Byerlys store has an annual bagging competition. You then move on to the company-wide competition. After winning both, I worked with our company’s training specialist, Dennis, for about two months before the state competition. We would do outrageous things to get ready, like bagging in the rain or having people cheer loudly as we bagged in the store. I competed in the state competition at the Mall of America and earned the title of Minnesota’s Best Bagger.

Q: Tell us about the National Best Bagger Championship.
A: After winning the state competition, I practiced with Dennis a couple times per month in person and over Skype. As the competition got closer, we upped the intensity – practicing with different groceries every time and changing how and where I practiced. About one month before going to Las Vegas, I practiced almost every day.

In February, my fan group of 10 and I traveled to Las Vegas for nationals. I competed against 24 other state winners for the title of National Best Bagger. The winner received a grand prize of $10,000 and a trip to New York to appear on the David Letterman Show (he started out as a bagger, too).

After our orientation on the day of the competition, I got into the mental zone. It was nerve racking though, because they had us sit behind the stage, in five teams of five, and you had no idea when you were going up on the stage to compete. When it was finally my turn, I was ready.

After I heard the announcer say “Ready, set, bag!” everything around me just faded out and all I saw were the groceries on the table.

I was pleased with how I bagged the first round and watched the rest of the rounds anxiously. When they called people to move on to the second round, I got really nervous because they didn’t call me until the very end. Whew!

Bagging in the second round, I was more nervous because there were higher stakes. After we finished bagging a second time, it felt like an eternity waiting for the results…I won third place! I was happy with the hard work I put in, and it’s really cool being one of the best baggers in the country.