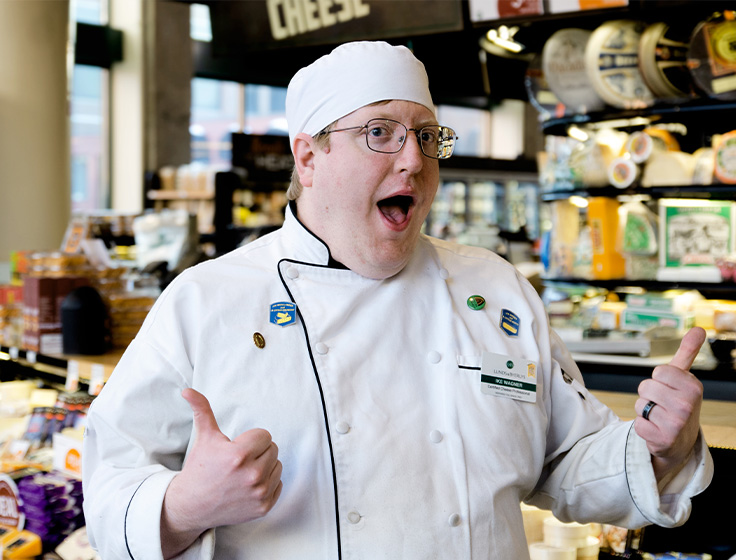 When you meet a cheesemonger, it’s impossible to resist the temptation to ask them if they have a favorite cheese — and yet, you kind of expect them to beam at you like a proud parent and say they’re all special. That’s not what happened when we posed the question to Ike Wagner, the ACS Certified Cheese Professional® at our Northeast Minneapolis store.

Every year, since the beginning of time, Ike’s dad buys a big block of Cotswold, a semi-hard, yellow English cheese packed with chives. “It’s his favorite cheese, and the only specialty cheese I knew about coming into this job,” he says. “So it has a warm place in my heart, and it’s also my favorite. It’s creamy and buttery and full of chives, and it’s got this big, bold tangy flavor. It’s one of the best things you can eat.”

Finding his way to cheese — and a new vocation
Ike is the kind of person who says things like, “Ever since cheese came into my life,” as if nothing that came before it matters, but in truth, his first love was music. He went to college to become a music teacher, but quickly realized he wouldn’t enjoy teaching. In his quest for a new vocation, he landed at Lunds & Byerlys: he’d been working as a barista in a cafe in Northeast Minneapolis, and a good friend told him he should come in, try out the different departments, and see what he liked. In 2007, he did just that, and eventually found himself in the cheese department, where the assistant cheesemonger invited him to be a cheese specialist. “At the time, I had no knowledge of cheese,” Ike laughs. “Well, I am from Fond du Lac, Wisconsin, so I had a pretty good working knowledge of cheese basics, and that’s it.”

“But I got to work very closely with two of our cheesemongers,” he explains. “They went out of their way to educate me at the counter, taught me everything I know and helped me find my passion for cheese.”

Pursuing his American Cheese Society certification
A couple of years ago, Lunds & Byerlys encouraged Ike to pursue his American Cheese Society (ACS) certification, a rigorous process involving months of study and a test akin to the bar exam. By that time, he’d been selling cheese for almost a decade. Still, he was amazed at how much there was to learn. While he was studying for the exam, he traveled the country, attending conferences, taking classes and learning about the world’s cheeses and the science behind them. “It was an amazing experience,” he says. “I drove all over Wisconsin, visiting cheesemakers and dairy farmers, so I could see how the cheeses were made.”

Taking the certification test was a nerve-wracking experience, he says. “I spent all that time studying, I went to Pittsburgh and took the three-hour test, and at the end of it, while everyone else was saying they thought they’d done well, I was like, I hope I passed.”

He had to wait two months to get the highly gratifying news that he had passed with flying colors. Not everyone does: There were 300 people taking the test with Ike that day, and he’s one of approximately 900 ACS Certified Cheese Professionals in the country. “It felt really good,” he says. “And people always ask if I use all that knowledge, and I do every single day — those little intricacies come up all the time at our cheese counter.”

Introducing people to new cheeses
As an ACS Certified Cheese Professional, Ike spends a part of each day in the cheese department cutting and wrapping cheese, but he’s also out and about in the store, baking off loaves of fresh bread or helping customers put together pairings. “The best part is getting to interact with the customers,” he says. “I love getting to know their love of cheese, helping them find something they’re really gonna love.”

It’s not surprising that, when asked how a person should go about getting out of their cheddar rut and exploring the wide, wide world of cheese, he says, “Come talk to your local cheesemonger!”

Ike’s approach is to ask people what they like — a few flavors, maybe a texture. From there, he’ll find related cheeses, and cut a chunk for the customer to taste. So for example, if he knows you enjoy cheddar, he might just stay in that category. “A lot of people assume there’s just one kind of cheddar, but it’s a huge category, and we have beautiful local, Australian, and Irish cheddars.” he says. “In England they make cheddars that are so dramatically different from ours — tangy, rich and grassy. But if I want to leave cheddar, I might suggest one of the alpine European cheeses, like Comté or Gruyère, they have tangy nuttiness that mimics cheddar.”

“We’re always happy to let you try a bunch of stuff,” he adds, “because that’s the easiest way to fall in love with something new. If you love it, if you say it’s absolutely not for me, either way helps us narrow it down. It’s like a really fun game — and seeing people’s eyes light up when they find something new is a wonderful feeling.”

Keeping up with the wide, wide world of cheese
That’s the thing about cheese, Ike says, there’s always something new, so it’s a lifelong adventure. Ike stays on top of the cheese world through ACS publications and conferences, but also by getting out and eating as much cheese as he can with his two favorite researchers — Mary, his wife, and Benny the chihuahua. “We live in a great place for cheese,” Ike says. “The Twin Cities are full of wonderful cheese shops, and there are so many artisan cheesemakers right here. I love to travel around and look for new stuff — if I find something good, I’ll make a stink ‘til we get it in the store.”

Ah, but what about the music? Ike plays trombone in the The Nova Contemporary Jazz Orchestra, a nonprofit big band orchestra that plays locally composed scores. “I get to be with cheese all day,” he says, “and then I go home and play music. It’s the greatest life ever!”