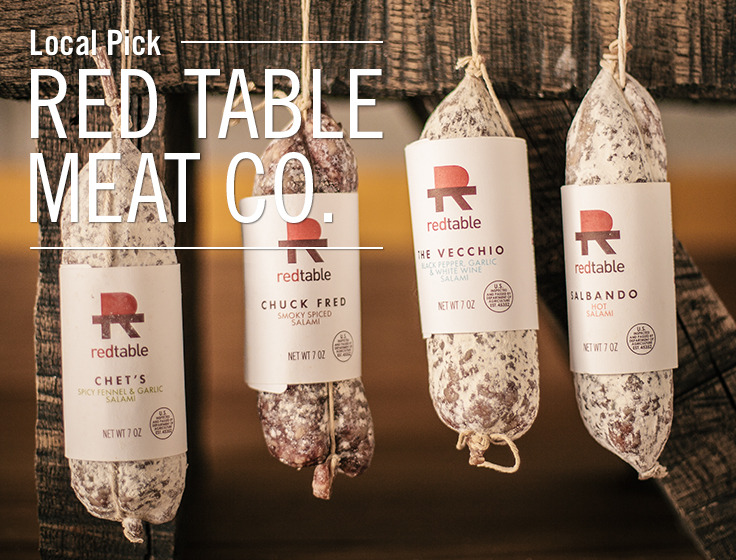 Ready for the best salami of your life? Look no further than Red Table Meat Co.

Founder Mike Phillips grew up in a small, rural farming community and saw the hardships that local farmers faced firsthand…and that powerful sense of community never left him.

As years went by, he worked as a chef at local restaurants, owning Chet’s Taverna in St. Paul for seven years before moving to the Craftsman restaurant, where he won multiple awards for his commitment to local ingredients and local farmers. However, finding quality cured meats for his recipes proved to be difficult. When he realized that chefs around the country sourced their pork from right here in Minnesota and Iowa, he began reaching out to local farmers in the hopes of making his own pork products.

“My thought was, why not in Minnesota? Why don’t we have that same sort of thing here?”

“I had travelled to France and Italy, and in every region people were making their own things out of their own pigs,” Mike recalls. “People are so proud of what happens in those regions – wine, cheese, meat. My thought was, why not in Minnesota? Why don’t we have that same sort of thing here? Not to mention…I just like to eat it!”

Mike went on to partner with five local hog farms that raise heritage breed pigs in small, sustainable settings, believing that the happiest pigs produce the best pork: “The quality of the pig makes a huge difference.” The pigs used for Red Table meats are hormone-free and only fed antibiotics if they’re sick. The pigs are allowed to be outside when they want to be and inside when they want to be. They’re unconfined and pasture fed, which means they are free to forage for their own food in the grass and dirt. At the end, they are fed a diet of peas and barley to give them a harder, more saturated fat that works well for salami. In the words of Mike, “They’re happy pigs.”

What makes Red Table salami different from regular grocery store salami? “A lot of the stuff you see on the shelves is really dry and old,” Mike explains. “Salami is meant to be eaten young and fresh, like a cooked sausage, not overdried like beef jerky. You want to be able to taste the meat, not just the salt and spices.”

Red Table meats are also different because of the way they’re made, in the traditional Italian style. Back in the days before refrigeration was invented, people would kill the pig, cut it apart and hang the parts above the fireplace, taking pieces to eat as they needed it. As the days and nights heated and cooled, the pig would dry and cure naturally. Red Table products are cured in the same way, mimicking this process by using cycles of fluctuating humidity and temperature to draw out the moisture from the meat.

The pigs are delivered fresh to Red Table. Before curing, the meat is ground, mixed with seasonings and stuffed into a natural casing. Over time a natural mold develops on the outside of the casing, which helps change the pH of the meat and make it really flavorful. The casing also helps keep the salami shelf-stable for a long time.

To serve, simply cut off the white outer casing and enjoy. Tip: If you’re having any trouble removing the casing, just wrap your salami in a slightly damp paper towel for about an hour. The casing will peel back in a snap! Once opened, small to medium salamis taste best within the first one to two weeks. We offer the following varieties of Red Table salami:

The Vecchio: A simple salami flavored with garlic, black pepper and white wine. Delicious in sandwiches, on pizza or in salads. Named after Mike’s mentor, salumiere Francois Vecchio, who taught Mike the art of restraint when it came to spices, in order to let the meat’s flavor shine through.

The Chuck Fred: A smoky, spiced salami with eastern European influences. Softly spiced with nutmeg, allspice, garlic, black pepper and white wine. Wonderful on its own or as a topping on fresh pasta or greens. Named after Mike’s friend and inspiration, an artist who went by the name Chuck Fred, who smoked until the very end.