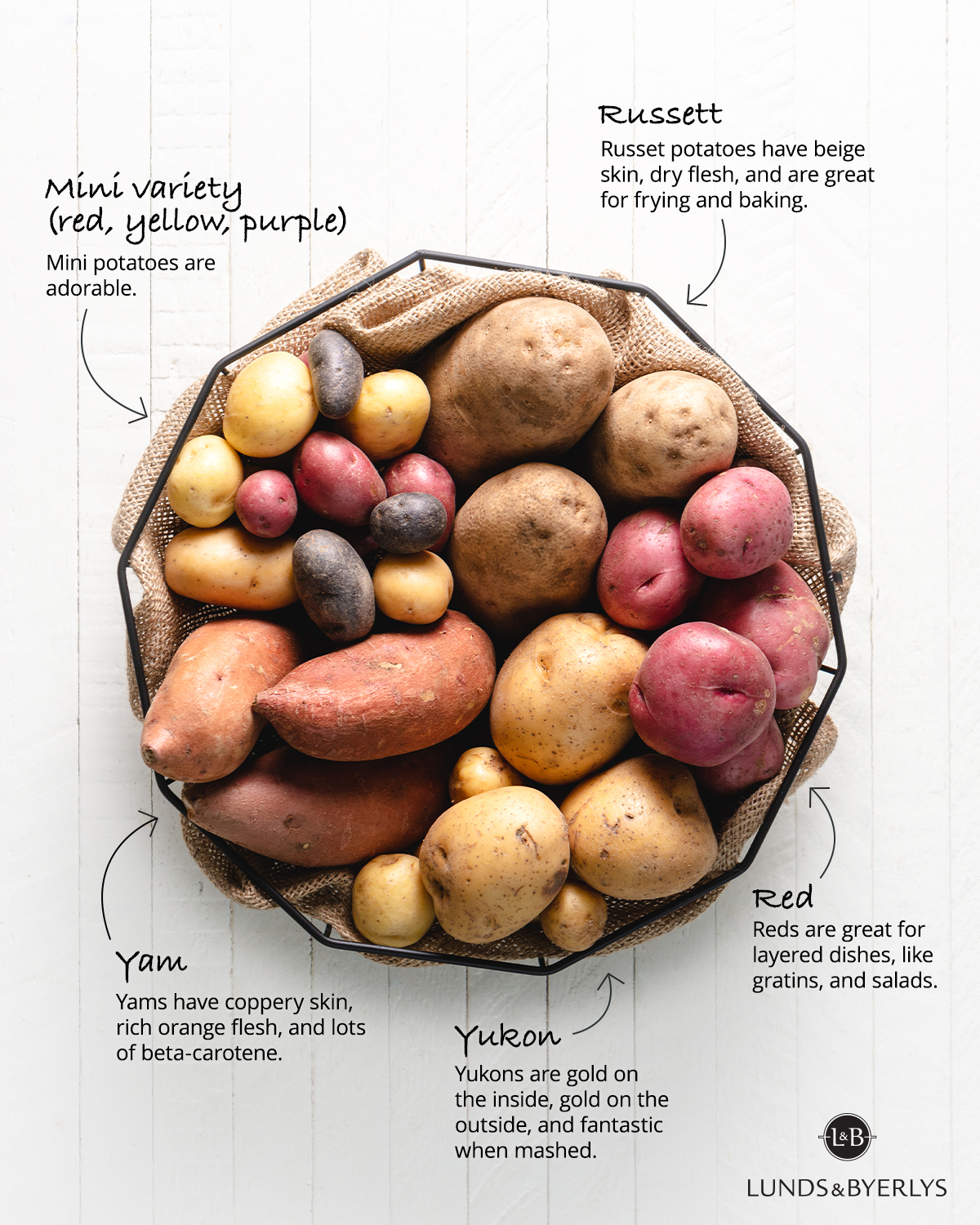 There’s that old saying, “Tomato, to-mot-o, potato, po-tot-o.” We use it anytime we want a colorful way to say that something is the same either way. It’s the way a grade schooler might say, “Same difference!” or how your coworker says, “Six of one, half a dozen of another,” or how dads say, “Different strokes for different folks.”

But we started thinking, “Hey, wait a sec! How has the potato — with all its distinct varieties and its hearty, earthy flavors — gotten mixed up in a phrase that means all things are the same? Potatoes are unique. Potatoes are special! Potatoes are mouthwateringly good!!

The humble potato needs a defender, and we’re stepping up to the plate. Potatoes are diverse, and each type deserves to be celebrated. If you’ve ever thought “potato, po-tot-o” ABOUT potatoes, this guide is for you.

Yam
The most common yam in the United States — the one familiar to anyone who has ever eaten a Thanksgiving dinner — is technically a soft sweet potato. It has coppery skin and rich orange flesh, and it’s labeled “yam” in stores to distinguish it from hard sweet potatoes, which are the type of sweet potato we know as (you guessed it) sweet potatoes. Yams are one of nature’s richest sources of beta-carotene, a powerful antioxidant.

Yams, or soft sweet potatoes, are scrumptious almost any way you prepare them. They can be roasted, baked or cooked in a casserole, as well as used in desserts like pies and cookies. Toss them in chili or make them into biscuits. The list is practically endless. So is the flavor.

Russet
Russet potatoes are the Platonic ideal of potatoes. They’ve got rough beige skin and dry flesh and are high in starch, which makes them great for roasting and baking — and twice baking. Their high starch content makes them ideal for french fries, and they’re great for mashing, too, because they’re terrific at soaking up butter and other creamy toppings. Starchy and delicious, russets are often peeled because of their rougher skin.

Yukon
Yukons are a fantastic all-purpose potato. They’re golden on the inside, golden on the outside and delicious anyway you slice them. They’re terrific for mashing but hearty enough to stand up to fancier treatments, like Hasselbacking. Yukons are great in potato salad, too. They naturally have a slightly buttery taste, which adds to their appeal. Mash ‘em, bake ‘em, roast ‘em, smash ‘em — the Yukon is up to the challenge.

Red
Reds are your go-to potato when you’re making a layered dish, like a gratin, because they hold their shape during cooking and don’t turn to mush. Reds’ ability to hold their shape makes them great for potato salads and soups, and their tender skin, which often goes unpeeled, adds texture and beauty to your finished dish. Try roasting them with Parmesan and garlic for a comforting treat.

Mini Variety (red, yellow, purple)
Mini varieties are picked before they reach their full size. They come in a variety of colors, and they’re great boiled, roasted or fried. They make an elegant side dish when served with a hearty main, like fish or steak, and because their skins aren’t peeled, they add an extra textural element to any meal. Or turn them into an impressive appetizer by giving them the Hasselback treatment. Mini varieties are delicate, delightful and delicious.