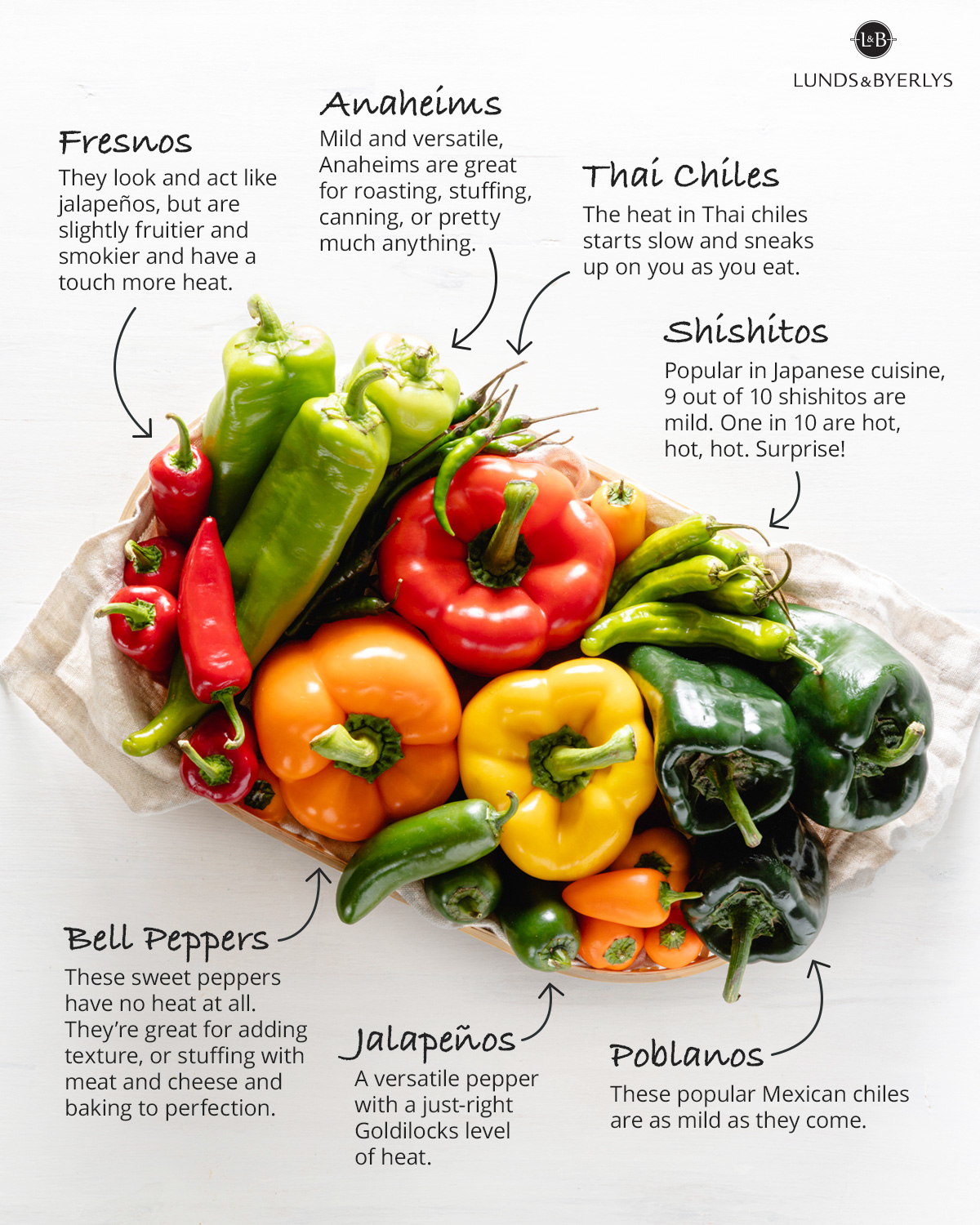 Once upon a time, in a kitchen far away, we were young Minnesota chefs out to conquer the world. Or, at least, to conquer the fundamentals — how to make the fluffiest pancakes, the creamiest scrambled eggs and the crispiest pan-fried chicken. We were determined to make a decent roux and to learn how to properly pronounce “bouillabaisse.”

But there was one thing we always avoided, one thing we always preferred someone else make for us: any dish with chile peppers. We found them intimidating — not only are some of them H-O-T (accidentally select one with a Scoville score in the stratosphere and your whole dish is inedible), we could never remember which peppers were which. How hot is a poblano? How does it compare to a shishito or Thai chile? Is a Thai chile hotter than a jalapeño or vice versa?

Then, one day, we said: Nunca más! We dedicated ourselves to understanding hot peppers, and it changed everything. Our culinary world opened up, and our dishes became more flavorful and more exciting. We were, all of a sudden, pepper people. We want the same for you.

In the Heat of the Bite

While chile peppers add texture and color to dishes, their main purpose is to bring the heat. What gives peppers their pungency? A compound called capsaicin, which is found largely in the seeds and white ribs of these fruits (yes, fruit!). Capsaicin is responsible for many of the health benefits associated with peppers. Studies suggest that this spicy plant compound may help boost metabolism, quell food cravings, improve blood pressure, aid digestion, ease joint and muscle pain, and promote cellular health.

The heat level of peppers varies significantly from one to another. Some are so mild, the heat is barely discernible, adding more complexity of flavor than actual mouth-burning bite. Others are so hot, just looking at them will set your mouth ablaze. We’ll walk through the heat level of different peppers below, but here are some general guidelines to keep in mind when working with chile peppers:

The heat level of chile peppers is measured in Scoville heat units (SHU). The lower the SHU, the milder the heat. The higher the number, the greater the potency. But no matter where a pepper falls on the Scoville scale, remember that the heat doesn’t just affect your mouth. It’ll stay on your skin — and if you touch your face or eyes with capsaicin-coated hands, you’ll feel the burn, literally. To avoid this, wear latex gloves while you cut hot peppers or wash your hands thoroughly after handling peppers and avoid touching your face or eyes.

Know Your Peppers
Here’s an introduction to some common peppers:

Bell Peppers: 0 Scoville units
Bell peppers don’t have capsaicin, so they don’t register on the Scoville scale. Instead, they’re prized for their texture and sweetness. As with other peppers, choose bell peppers with firm, shiny skin. Bell peppers are big and round, so they’re great stuffed. They’re also fabulous on homemade pizza, chopped on salads, or eaten alone. Try our cheesy, satisfying Slow-Cooker Stuffed Peppers and our Sheet-Pan Sausages, Peppers & Onions to fall head over heels for these sweet, easy peppers.

Shishito Peppers: 50-200 Scoville units 🌶
Shishito peppers are the shape-shifters of the pepper world. Nine out of 10 shishito peppers are mild and slightly sweet, but one in 10 is very spicy. So proceed with a bit of caution, but don’t avoid these delicious peppers. They’re bright green, between 3 to 5 inches long, and popular in Japanese cuisine. At the store or farmers’ market, look for firm peppers without wrinkly skin. Shishitos are great charred, wok-seared, or blistered.

Poblano Peppers: 1,000-2,000 Scoville units 🌶🌶
Dark green and mild, poblano peppers are as mellow as they come. They’re the go-to pepper for those who like the heat dialed way down. Dried poblano peppers are known as ancho peppers. When shopping for poblano peppers, look for firm, dark green skin and a bright sheen. Avoid poblanos with wrinkly skin. Poblanos are great roasted over a fire or stuffed and baked or grilled, as in our Grilled Stuffed Poblanos. They’re also fabulous for mildly spicy soups and stews, like our hearty Poblano Chicken Stew. One of our favorite poblano recipes is Chicken Chile Verde. Keep this one in your back pocket as the temps start to drop in the fall. It’s a warm and comforting meal for colder days.

Anaheim Peppers: 500-2,500 Scoville units 🌶🌶
Versatile and mild, Anaheim peppers are 6 to 10 inches in length when ripe and can be used when they are young and still green or fully ripe and red. They’re an easygoing pepper with a heat level on par with a very mild jalapeño. They’re great for roasting and canning, thanks to their large size, and they’re great stuffed, turned into salsa verde, prepped with chicken or pork, or added to eggs.

Jalapeño Peppers: 2,500-8,000 Scoville units 🌶🌶🌶
These popular green peppers have a kick, but they’re not overly hot, so they tend to be a family favorite. You can sneak a little heat into dishes without putting anyone off. When dried, jalapeños are called chipotle peppers and they have an irresistible smokiness. Jalapeños are delicious added to soups, stews, dips or stuffed with meats and cheeses. Try our Slow-Cooker Corn & Jalapeño Dip, our Bacon Cream Cheese Jalapeños, or our spicy Skillet Jalapeño Cornbread.

Fresno Peppers: 2,500 – 10,000 Scoville units 🌶🌶🌶🌶
Fresno peppers look and act a lot like jalapeños. But Fresnos have a slightly fruitier, smokier flavor and they tend to be a touch spicier than a jalapeño. The walls of Fresno peppers are thinner than jalapeños, which makes them better for drying but not as ideal for stuffing. Fresnos are great for pickling, tossing on the grill with pork chops, adding to omelettes or making chutney.

Thai Chile Peppers: 50,000-100,000 Scoville units 🌶🌶🌶🌶🌶
If shishito peppers are the tricksters of the bunch, Thai chiles are the quiet, methodical ones that play the long game. Their heat slowly sneaks up on you as you eat, lightly spicy in the beginning — burning up your lips by the end. So don’t add them with impunity to dishes! Used sparingly, though, they make flavorful, delicious additions to curries, soups, stews and more. Use them to make spicy Thai noodles, stir-fries, or your own homemade Thai chile sauce.