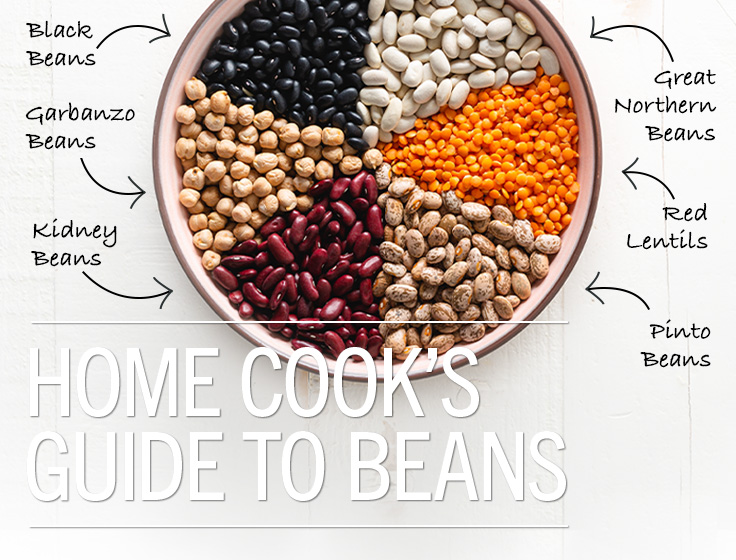 We’ve had a little bit of a run on beans here at Lunds & Byerlys. Even before the “stay at home” order, legumes were having a moment — they’re the original plant-based protein, after all. Now that we’re all collecting shelf-stable staples so we can shop a little less often, they’re pretty much the It Girl of pandemic pantries. And if you’re anything like us, you’re now sitting on a veritable hill of dried beans.

So now what? Time to get cooking. We recently sat down with the chefs in our test kitchen and asked them for some tips — soaking, cooking and, of course, recipe ideas. Here’s what they had to say.

Choosing the right bean for your recipe

Every bean comes with its own flavor, texture and color. Here, we make some suggestions for cooking with some of our most popular beans, but remember, you can generally swap in whatever bean you’ve got in the cupboard. Just keep in mind that cooking times will vary from bean to bean.

Sometimes called black turtle beans, black beans are soft and have a rich, full flavor that’s wonderful paired with cumin. Think black bean soups and cold salads — like sweet corn, tomatoes, bell peppers and quinoa. They’re also the ones we’d use to make veggie burger patties and enchiladas, like our Turkey and Black Bean Enchilada Skillet. But our favorite way to eat them these days is to toss them with some queso fresco and cilantro and tuck them in a warm corn tortilla.

The larger of the common white beans, Great Northerns have a light, nutty flavor and a nice, firm texture that lends itself well to stews and brothy soups, like a zippy Chili Blanco with loads of Mexican oregano. Our chefs like to combine them with seafood, too. They’re wonderful baked with white fish and potatoes or in a broth with shrimp, chile oil and fresh herbs. And, for a healthy, customizable meal, you can always pile them on a bowl of wild rice with a handful of veggies and nuts.

What about Cheesy Artichoke & White Bean Buffalo Dip? For that we’d use its creamier cousins, navy or cannellini beans.

Garbanzos are sometimes called chickpeas or ceci. Whatever you call them, they’re one of those foods that tastes so much better when cooked from scratch that it’s kind of a revelation. They have a full, nutty flavor and a lovely texture — grainy and slightly fluffy.

Of course, the first dishes that spring to mind for garbanzos are falafel and hummus. Our team will also throw them into a salad for extra oomph, like our Italian Panzanella, and we recently stirred them through wilted dandelion greens. They shine in rich, spicy situations, like a Moroccan stew or Chickpea Curry. We are absolutely in love with the trend of coating garbanzos in spicy, herby goodness and roasting them ‘til they’re crispy and crunchy. Best. Snack. Ever.

This is your classic bean about the kitchen. By which we mean: If you’re only going to keep one bean in your pantry, this is it. Pinto beans cook up ultra-soft and creamy, and you can use them in just about anything.

They’re definitely the bean for Mexican and Southern cuisine. They pair beautifully with smoky meats, so whether we’re making refried beans or a big pot of beans to eat over rice, in tacos or rolled up in burritos, we’ll include some ham or bacon fat in the cooking process. Speaking of tacos, pinto beans are also right at home in a Taco Skillet.

The thing we appreciate about kidney beans is their heartiness — they hold their shape and their brilliant red color, so they look fantastic in food. They’re the soul of the classic Creole dish Red Beans & Rice, of course, but they’re also our go-to if we’re making a big pot of chili. On the summery, barbecue side of things, kidney beans are fantastic in a Five Bean Salad.

There are a few different types of lentils. Here, we’ve included red lentils, which have an earthy, slightly sweet flavor and quickly soften to a purée in the pot. They’re great for thick soups, dals and curries, like Curried Coconut and Chicken Red Lentil Soup.

Black, green and tiny French lentils remain whole during cooking, so they’re the ones we turn to for lentil salads: try kale, feta, nuts and green onions in a lemony dressing. We’d also simmer them with a ham bone and a handful of savories for a classic Lentil Soup. For a simple but delicious meal, we’ll cook them with stock, garlic and thyme and serve them over a buttery slice of toast with a poached egg. Delightful!

Soaking and cooking your beans

Cooking beans is easy — it’s pretty hard to break them. If you overcook a batch, there’s always refried beans. Here’s a basic approach to a pot of beans: