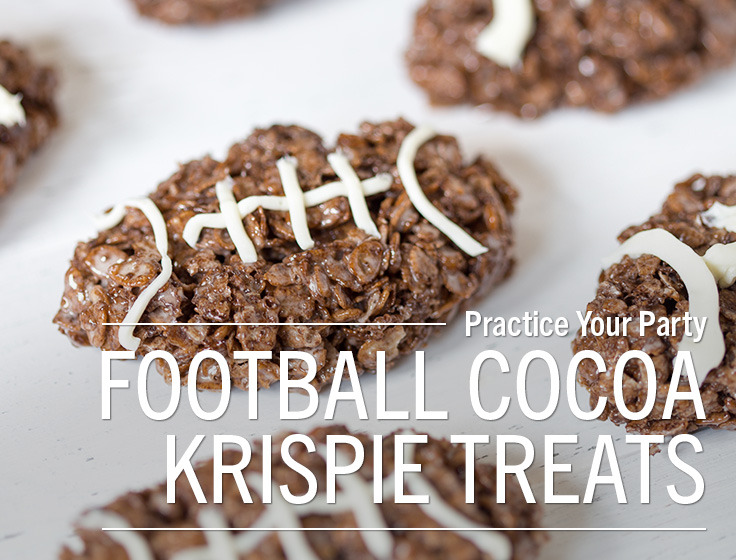 Sweeten up your football party with these fun, chocolaty treats! A must-try recipe from Twin Cities food blogger greens & chocolate.

Every year for the past five years, I have participated in what our friends have named the “North Shore Football League” as part of fantasy football. The first year my team was surprisingly good (thanks for the drafting help, Dad!) and I won the championship. Ever since that first year, my team, which I named Touchdown Queen, was always a much-hated team.

I actually wasn’t very good for the next four seasons, but people still loved to win against me. Really, it was just a fun chance to trash talk to friends who lived cross country and a good reason to tune into NFL football on Sundays. Which, of course, called for football food.

Sadly, this year we collectively decided to stop the North Shore Football League due to a combination of busy lives and waning interest. While I’m not super bummed about it, I’ll definitely miss the weekly text messages with trash talk, the weekly emails from our commissioner and, obviously, the excuse to check in on football and make football food.

It’s just that aside from fantasy football, I’m just not a huge NFL fan and my husband isn’t either.  So, no real excuse to make football food.

However, for those of you who ARE huge football fans, I have a super fun and easy treat for you to make! These Football Cocoa Krispie Treats would be perfect for tailgating or an afternoon watching your favorite team. They’re a fun change from the typical rice krispie treats, as they are made with Cocoa Krispies (or Cocoa Pebbles!) and then shaped into little footballs and decorated.

That said, let me assure you these do not require ANY artistic abilities! I was nervous they were going to come out looking nothing like footballs, but after the first few that I shaped, I feel like I got the hang of it. For the frosting that I piped on, I played around with a thinner line and a thicker line. Personally, I liked the thinner line but you can play around with it and make the frosting however thick you’d like!

One thing is for sure, regardless of whether your team wins or not, you will have a sweet dessert to cap the game off with!