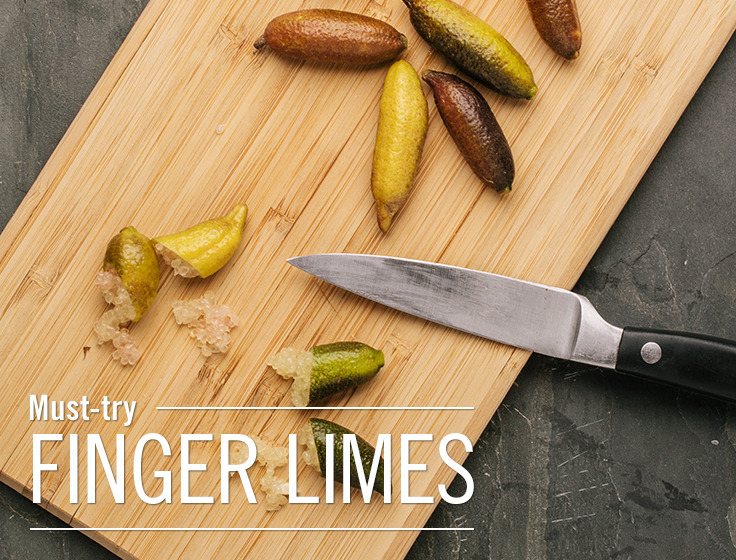 These little micro-citrus fruits grow about three inches long at most and are the shape of a finger – which is where they get their name. Inside, they’re filled with hundreds of tiny little balls filled with tangy, sweet-and-sour juice that literally burst in your mouth when you bite into them.

To eat a finger lime, simply cut it in half and squeeze up from the bottom like a tube of toothpaste. The little citrus beads will pop right out!

They taste like a cross between a lime and a grapefruit, and you can use them wherever you’d typically use lime juice. They’re a huge hit in cocktails (finger lime margarita, anyone?), but they’re also wonderful as a garnish on salads and seafood. You can also mix them into ice cream or cheesecake.

Finger limes are believed to be up to 18 million years old, originally from Australia. Although they were nearly wiped out by British settlers clearing land for agricultural use, they eventually were cultivated again and now are one of the hottest gourmet citrus fruits around. Finger limes are also grown by a handful of farmers in California.

They can come in many different colors, including green, pink, yellow and red. When choosing your finger limes, look for ones with brightly colored skin; avoid those with dull, dry or shriveled skin.

You can store them for up to three weeks in the refrigerator and about a week on the counter. You can also freeze whole finger limes for up to a year and they will still retain their “bursting” qualities. However, if you cook with finger limes, they will wilt down and taste just like a regular lime.

Look for finger limes in our produce department.

Sources:
Food 52
Wikipedia
Cooking on the Weekends
The Guardian