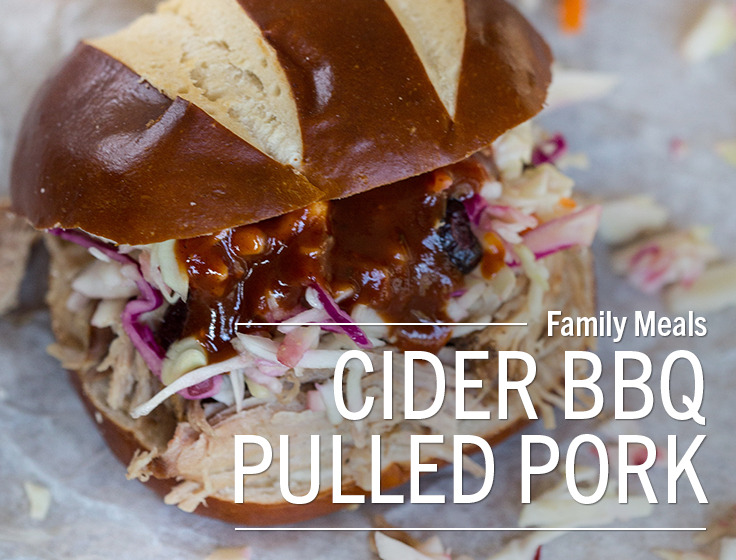 This easy slow cooker pulled pork recipe from Twin Cities food blogger greens & chocolate is sure to become one of your fall favorites!

Since my husband received an electric smoker for his birthday this year, we’ve been slow cooking most of our meats – like ribs,
brisket and pork shoulders – in the smoker instead of the slow cooker. The flavor that gets infused into the meats from the smoker seriously cannot be beat …  but here’s the thing: smoking meat is not a hands-off process! It’s not like the slow cooker, where you “set it and forget it.” No, you have to be around to add more smoker biscuits and make sure the temperature is staying consistent. Not exactly weeknight friendly.

Since our expectations for meats are pretty high now that we’ve been spoiled with all the smoked meat our hearts and bellies desire, I was a little nervous to try a pulled pork recipe in the slow cooker. Spoiler alert: we were not disappointed with this recipe!

This Cider Pulled Pork is not only super easy and delicious, but it will also make your house smell like fall. The cider and cinnamon combined with the pork is a similar combination of serving pork tenderloin with applesauce, except in my opinion even better.

Since I can’t stop with just pulled pork, I made a cider barbecue sauce and a tangy coleslaw to go on top.

Then there’s the coleslaw. I can’t eat a pulled pork sandwich without coleslaw. While I am typically super Midwestern and love a
good mayo-based coleslaw, I went vinegar-based with this one so it wasn’t too overpowering with the pork. A little bit of apple cider vinegar, honey, Dijon mustard and dried cranberries along with a bag of coleslaw (so convenient!) were all I needed for a quick and delicious slaw.

Altogether, this sandwich just screams comfort food and fall! I loved the ease of the pulled pork in the slow cooker, and we all loved the combo of the pork with the cider barbecue sauce and coleslaw. It’s pretty much fall in a sandwich!

For the cider BBQ sauce: