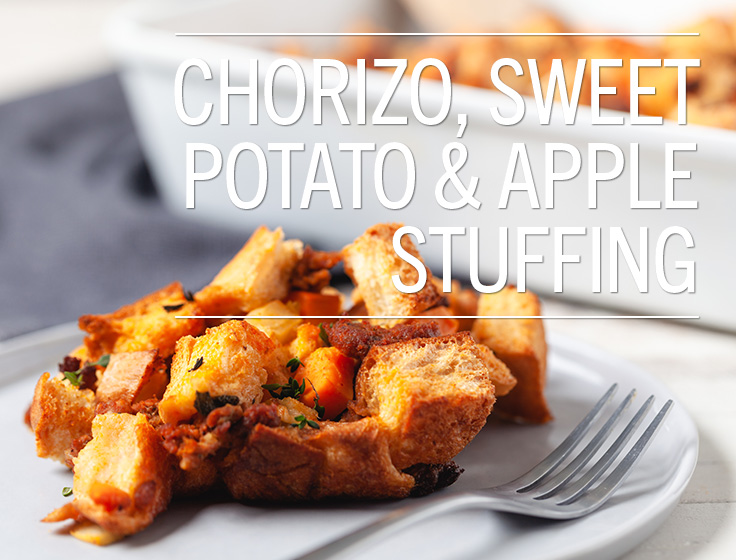 There are very few holiday dishes that I could stand to eat more than a couple of times a year (I’m looking at you mushy green bean casserole), but I would never pass up a hearty helping of stuffing in mid-July. I’m not talking about Stove Top, either. I’m talking made with a loaf of bread, loaded with veggies and always, always fresh sage.

This Chorizo, Sweet Potato and Apple Stuffing is a fun play on the sausage and apple stuffing recipes that are pretty popular around the interwebs. Instead of Italian sausage, I spiced things up with chorizo and then along with the apples I added
a couple of sweet potatoes to balance out the heat from the chorizo. A little bit of spice and a little bit of sweet.

While there are a few more steps involved in making this stuffing than the boxed kind, like toasting the bread and cooking the chorizo, apples and sweet potatoes, you can get it all assembled and have it ready to go the day before Thanksgiving. This
leaves you plenty of time on the day of to worry about the bird, the pies and that infamous green bean casserole.

The other great thing about this recipe is that while it’s different from what you might be used to, it’s not TOO different. I know people get a little cranky if their beloved cranberry sauce isn’t on the table and don’t even think about nixing the marshmallow topped sweet potato casserole. But I’m confident that this would make traditional stuffing lovers just as happy as the boxed stuff. Happier, even!