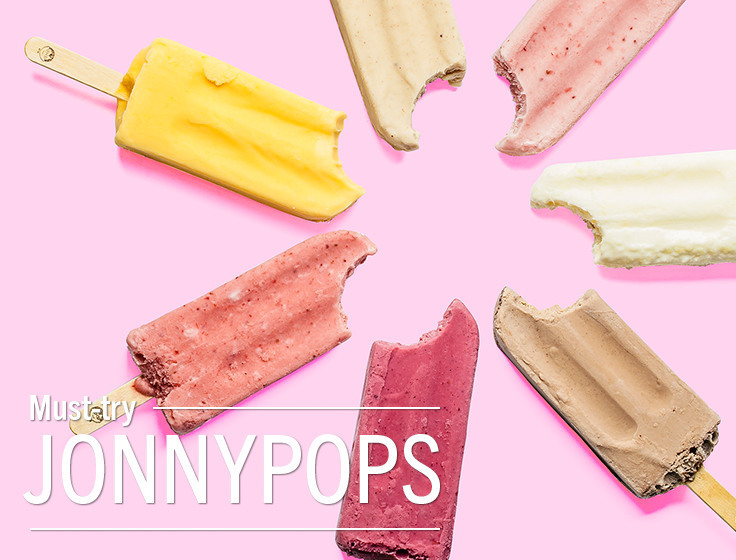 Don’t miss the JonnyPops BOGOGO event going on now at all
Lunds & Byerlys locations! Buy one box of JonnyPops, get one FREE and JonnyPops will donate $1 to the Hazelden Betty Ford Foundation to support local addiction recovery. 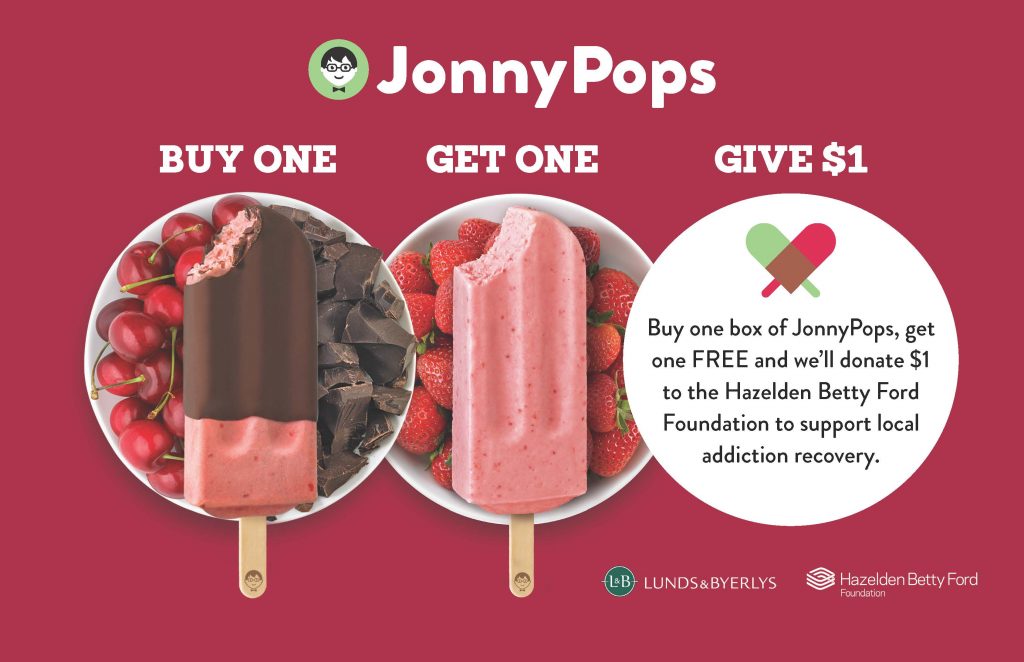 When JonnyPops was created, Erik and co-founder Connor Wray also wanted to define a social mission for their brand as a way to engage their consumers and give back to the community. In Jonny’s memory, JonnyPops donates a portion of their proceeds and products to the Hazelden Betty Ford Foundation, a national leader in addiction treatment and recovery. Additionally, one very JonnyPops stick you’ll find a good deed that you’re encouraged to pay forward – making the world a better place, one pop at a time. “We hope to raise awareness of substance abuse and make a difference in the lives of those affected by the disorder,” says Erik. “There’s a lot of stigma around addiction. In the past few years, we’ve really been able to bring our mission to life.”

JonnyPops continues to see growth across the country. When Erik Brust, Founder and CEO, was a freshman in college he and his cousin Jonathan dreamt up the idea for JonnyPops. After walking through the frozen treats aisle, they realized everything fell into two categories: creamy + unhealthy or icy + artificial.

Together, Erik and Jonny were inspired to create a simple, better-for-you frozen treat with real fruit as the main ingredient(s). Unfortunately, before the cousins could get started on their new business, Jonny passed away as the result of a drug overdose. He had struggled with addiction for several years, seeking treatment at the Hazelden Betty Ford Foundation’s youth centers, and his passing came as a devastating blow to all who knew him.

The following year, Erik told some of his friends at St. Olaf College about his cousin’s passing and the idea they had together. Moved and inspired by the story, they all pooled their money together and began to work on a recipe for JonnyPops, named after Jonny, from their dorm room. “We went around with ice cube trays, asking other students to taste test!” Erik recalls. In April of 2012, they made their first sale to a local sandwich shop. “Within 2 years, we were skipping class to pitch our products to local stores.”

JonnyPops are made with less than ten ingredients: real fruit, cream, cane sugar, purified water and a pinch of salt. “The main ingredient is real fruit, so sourcing high-quality fruit is our main concern. If we were to get unripe fruit like other manufacturers would use, the product quality would go down,” Erik explains. The real cream gives the pops a unique taste and texture – like a smoothie-on-a-stick! Even better, each pop has roughly half the fat and calories of traditional ice cream.

In 2015, JonnyPops also launched a school lunch program that is Smart Snack approved. Offering half a million Minnesota school kids the chance to have Strawberry Banana & Cream JonnyPops as a wholesome part of their school lunch menu. Since then the company has expanded to almost every state and added Triple Berry & Cream to the menu. As the school year starts, the company is excited to also be offering special monthly birthday parties at various schools.

In the spring of 2018, JonnyPops launched their Delight Line. It’s full of delicious, delightful chocolate flavors. The idea behind each flavor was based on input from the community and recommendations they’ve heard over the years. The new flavors include Cherry Chocolate & Cream, a crowd favorite at the MN State Fair, known as Cherry on a Spoon. They also upgraded their coffee chocolate pop to Cold Press Coffee Chocolate and Cream, with a smoother taste. The other three new flavors are Root Beer Float & Cream, Vanilla Mint Chocolate & Cream and Dark Chocolate & Cream. All 5 flavors are less than 200 calories and made with wholesome ingredients and nothing artificial.

“I hope as we grow, we don’t give up our community connection,” says Erik. “That’s what led us to create the brand and products that people like.”

Look for all delicious flavors available in the frozen desserts aisle of your local Lunds & Byerlys store! Look for two new flavors, Pumpkin Pie and Gingerbread arriving this fall!