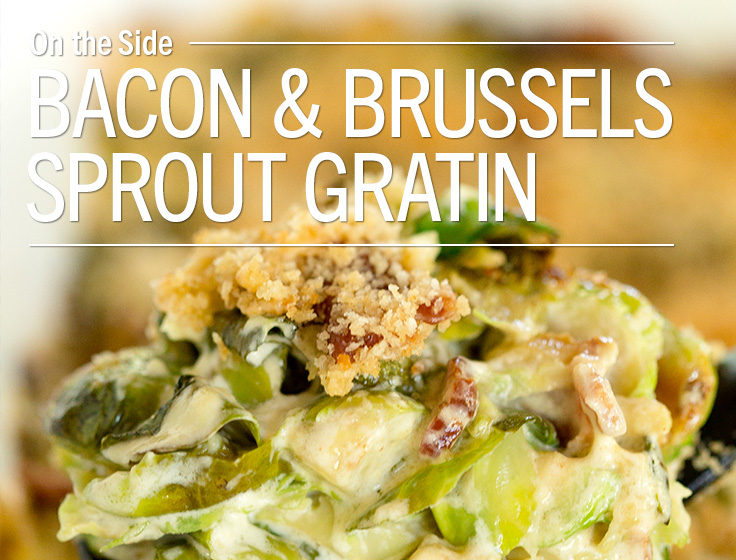 Twin Cities food blogger greens & chocolate has created a scrumptious update on a Thanksgiving favorite using Brussels sprout, the vegetable of the moment.

I’m going to go out on a limb and say that this Bacon and Brussels Sprout Gratin is a MUST-make this holiday season. You’d be crazy to pass it up and not make it for your family or friends.

For starters, the first ingredient is bacon. Can you really go wrong with a recipe that starts with bacon? Second, it has lots of Gruyère cheese, heavy cream and crunchy buttered breadcrumbs. The true MVPs, however, are the Brussels sprouts. I have been a fan of Brussels sprouts since I was a kid (no joke!), and it makes me so happy that they are popping up in recipes everywhere these days.

This Bacon and Brussels Sprout Gratin is simply irresistible. Better yet, it’s so simple to put together. To make this gratin, you’ll start by frying up that bacon. I usually like to bake my bacon in the oven, but we need the bacon grease for the rest of the recipe. So you’ll fry the bacon, and then cook the Brussels sprouts in the bacon grease until slightly softened. You don’t need them to be completely cooked because they’ll soften up in the oven.

One note about the Brussels sprouts: I used a combination of shredded and quartered Brussels sprouts. I loved the consistency of the combination in the gratin, and would highly recommend making it this way. Of course, you can just chop them all into quarters or shred them all if you prefer.

After cooking the Brussels sprouts, the only thing left to do is assemble and bake! This gratin is perfect for a big holiday meal because it can all be prepped in advance up to this point. If you want to make it a day ahead of time, you’ll do everything besides baking the gratin. Then once you’re ready, you can pop it in the oven and get it all bubbly and creamy.

One thing is for sure, and that is — this dish will be the hit of the table. You’ll be asked to make this year after year!

*I quartered half of the brussels sprouts and shredded the other half.